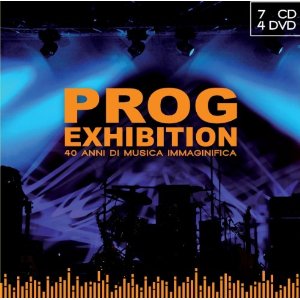 How can a box set that took me nearly a week to work my way through (it was a wonderful week indeed!) be condensed into a review of less than 5000 words? This writer will attempt to do the impossible. To summarize this concisely, all you really need to know is that – if you are, of have ever been a fan of classic Italian progressive rock, you will definitely want this set. Featuring a number of live sets from a festival in Rome that took place on November 5th and 6th, 2010, the material on the seven audio discs is pretty much mirrored in video form on the four DVDs of the set. Packaged in a clamshell box with a 28 page booklet, there is so much here it's hard to know where to start, so just jump in anywhere.

The first disc features two sets: two long cuts by Sinestesia, and seven cuts by The Trip, featuring the Atlantide / Time of Change version of the band including Joe Vescovi, Arvid "Wegg" Andersen and Furio Chirico. Included in their set are favorites "Caronte," "Atlantide," and "Ode a J. Hendrix," as well as a couple medleys. Moving on to the second disc (still on the first DVD), Maschera di Cera opens things up with "Fino all'aurora" and a handful more cuts for an outstanding, if all too brief performance. Next up – and the final performance on the first DVD – is the trio of Tony Pagliuca, Aldo Tagliapietra and Tolo Marton – basically the core of mid-70s Le Orme minus their drummer. The nine cuts draw heavily on material from Felona e Sorona and Smogmagica. Drumming on this set is Carlo Bonazza, and former King Crimson violinist David Cross appears with the band on a couple numbers including the Crimson classic "Exiles."

The third and fourth CDs in the set, as well as the entire second DVD, comprise a lengthy set by PFM drawing material from all their classic early and mid-70s albums, with Jethro Tull's Ian Anderson joining for part of the set including versions of "Bourée" and "My God," and a band tribute to the late Demetrio Stratos with a version of "Luglio, Agosto, Settembre Nero." The DVD of the PFM performance may well be the high point of the entire box set. Onward to disc five (and DVD three), where Periferia del Mondo open with three long cuts for a total of about 25 minutes, leading into a set by Nuova Raccomandata con Ricevuta di Ritorno, featuring members of the original RRR band (Luciano Regoli, Nanni Civitenga), newcomers including vocalist Cristina Cioni, and keyboardist Claudio Simonetti of Goblin (the set includes an all-too-brief medley of "Suspiria" and "Profondo Rosso" main themes). Also joining the band is Thijs van Leer of Focus for a version of "House of the King," and the band closes their set with the twelve minute "Palco di Marionette."

Disc six begins with a five song set by Abash, a six-piece this writer wasn't previously familiar with, but definitely up to the level of the other bands here, pulling pastoral and aggressive elements from a variety of styles into a unified progressive concept. In particular the voice of singer Anna Rita Luceri makes this short set a standout. Following that we have a nine song set – including a couple medleys from the reformed Osanna, featuring two original members, along with guests Gianni Leone (vocals and Hammond) and a special appearance by sax man David Jackson. And in that set are versions of "Introduzione" (Balletto di Bronzo) and "Theme One" (VDGG). Disc seven and the entirety of DVD four is an exceptional nine song set by Banco, with material drawn from throughout their long career. There are too many highlights here to enumerate in a review, but needless to say both the disc and DVD are among the high points of this entire collection. A guesting John Wetton was part of the set also, but due to copyright problems, none of the material which he appears on could be included.

In conclusion, this set is far more than a mere documentary of a single festival. The sets by The Trip, Osanna, and Raccomandata Ricevita Ritorno are welcome reunions that one hopes will continue long into the future. The sets by Pagliuca / Tagliapietra / Marton, PFM, and Banco, and the participation of guests from other classic bands show that these artists are as relevant today as they ever were, and the sets by newer bands Sinestesia, Abash, Periferia del Mondo, and Maschera di Cera illustrate the mix of contemporary musical idioms with the enduring influence of those classic bands.