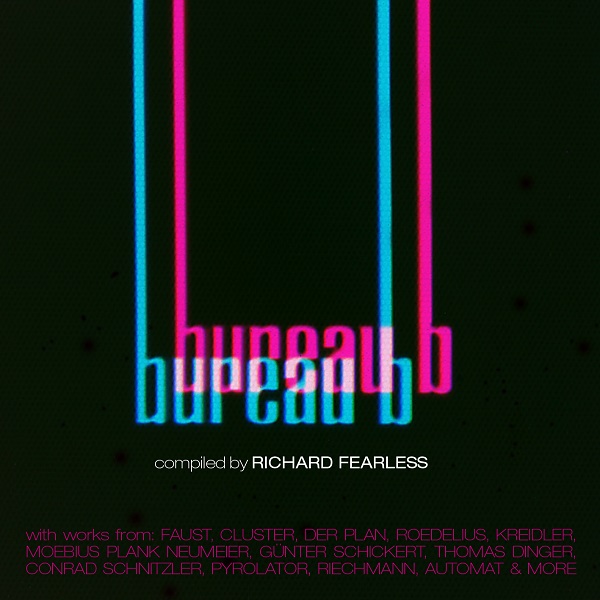 Richard Fearless, the founder of British electronic band Death in Vegas, has been influenced by a wide range of genres including electronica and Krautrock. So he was a natural choice to curate Bureau B’s latest Kollektion compilation. Over the past five years Bureau B has acquired the back catalogs of many pioneering Krautrock artists including Conrad Schnitzler, Pyrolator, Moebius, Roedelius, etc. amassing quite a list of available recordings. Richard Fearless listened to the entire collection and selected his favorite 25 pieces spanning the decades from 1976 to the present. There is some sort of logic to the order and flow of the music, but the dates are all over the map, reinforcing the timeless nature of this groundbreaking music. Many of the artists on this compilation are familiar to me (Faust, Cluster, Qluster, Moebius, Roedelius, Thomas Dinger, Pyrolator, Günter Schickert, Der Plan, Ougenweide, Reichmann, Automat, and Asmus Tietchens). And there are several I’ve never heard before (Phantom Band, 39 Clocks, You, Sølyst, Gregor Schnitzler (Con’s son), and Kreidler). The odd ball in this whole collection is Ougenweide, the German medieval folk band. They were active in the 70s and then a 30 – 40 year gap before their latest release Herzsprung in 2011. The track on this compilation is the 50 second electronic track “Tritons Ruf” from Herzsprung. It quite obvious that Richard is enamored by Cluster, its various incarnations, and the solo work as they account for eight of the 25 tracks. There are also two by Faust and two by the Phantom Band. Richard tends to stay away from the harsh side of avant garde experimental electronics. For example the Asmus Tietchens track from 1980’s Adventures in Sound is one of his more accessible tracks. The track order follows a trail from weirdness and spoken word through sequencer driven music to long repetitive drones (Faust) , post-punk new wave, TDream territory, and of course Cluster. Tracks that caught my attention are Sølyst’s “The Swell,” Thomas Dinger’s “Für Dich,” Kriedler’s “New Earth,” Phantom Band’s “Gravity” that reminded me of ex-Wire Gilbert and Lewis (Dome), and Cluster’s “Soweisoso.” Newcomers to the genre would be well served by this compilation.