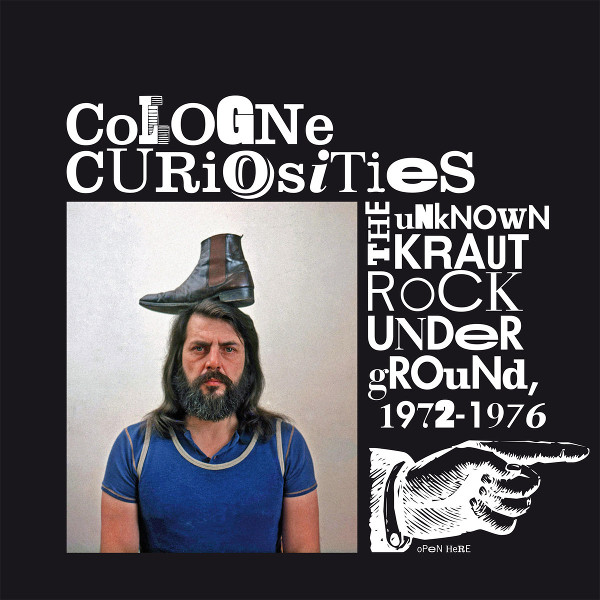 When the music on this compilation first surfaced in 1996 there was skepticism of its authenticity. Many thought these tunes were recorded by contemporary musicians emulating music from the 70s. It has since been established that this music was in fact recorded in various studios in and around Cologne, Germany and produced by Toby Robinson. Toby was one of the engineers working at Stockhausen’s WDR and Dieter Dierks Studio in the mid-70s. He assisted many well-known Krautrock bands including Can, Birth Control, Mythos, and Dzyan. The music on this disc was done for Toby’s own amusement. Bands would come into the studio for practice sessions, record demos, and during slack times, impromptu jams. Toby recorded most of these sessions featuring himself plus friends and musicians, some under pseudonyms. This reissue disc contains seven bands selected from Toby’s tapes, all unknown and with just these tunes as their only recorded output: The Astral Army, Spirulina, Chronos, Neil Andersen, Baal, Ten to Zen, and Fuerrote. The music is all over the map with Krautrock experimentation being the unifying factor. The disc opens with the so-so “Interstellar Shortwave” by The Astral Army. This post-punk song reminds me of Iggy Pop as well as some of the newer Krautrock bands like Mandra Gora Lightshow Society, Seid, and Vibravoid. The second tune improves the listening experience with Spirulina’s “The Message,” a floating atmospheric piece akin to Harmonia and Neu! Next is another superb experimental tune, this time Chronos’ “Schaudernacht” with its dissonant Frippian guitar chords and sequences, analog synths, and its punk / Krautrock blend. Then with Neil Andersen’s ”Feuerwerk” we move into extreme abstract territory. This is a timeless sound poem / musical environment / emotion. There is no forward or backward movement, just a pleasant moody atmosphere. Like Billy Pilgrim in Slaughterhouse-Five, the music is unstuck in time. To bring you back to reality, the next track, Baal’s “No God / Astaroth,” is a bizarre blues rock / Krautrock / gothic song with comparisons to Captain Beefheart and Dr. John. The sixth track is Ten to Zen’s “Innerst,” a pulsating drone-fest bearing Faust, Harmonia, Eno, and Neu! influences. This abstract piece slowly takes form over its ten minutes. And the disc closes with Fuerrote’s “Ganz Wie du Willst,” a 14-minute Kosmiche extravanganza with sustained notes, feedback, and trippy guitar riffing with resemblences to Pink Floyd’s “Set the Controls for the Heart of the Sun” and Quicksilver Messenger Service’s “Maiden of the Cancer Moon” plus anticipating the abstract processed guitar drones of Nadja. Like most compilations, this a mixed bag, but worthy of investigation.