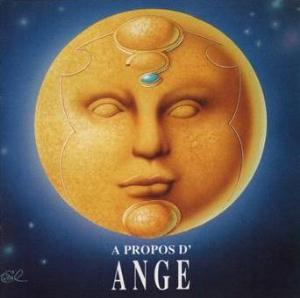 In the history of French rock, two names stand out among all others in terms of leadership, originality of style, and influence over all that would follow. Magma's contribution is well known, having spawned the careers of numerous other spinoff bands, sound-alikes, solo artists, and through further expansion and development of their unique style in various combinations with jazz, rock, neo-classical and avant-garde, have left a legacy that is nearly unparalleled in the world of music. Lesser known, and perhaps more localized due to their high lyrical content, but every bit as influential were the French symphonic band Ange, driven by the theatrics, poetry, and unique vocal stylings of their charismatic leader Christian Decamps. In the period from 1974 through '78 they produced some of the most powerful symphonic rock ever recorded, and in the process influenced two generations of bands that would follow in their footsteps. It seems only fitting, then, that in 1994 — twenty years after Ange's second album Le Cimetière des Arlequins created a stir in the French rock world by reaching gold status — that the second generation of bands influenced by their sound would offer this tribute to the work of original masters.

Naturally, when one listens to any song, the combination of music and lyrics speak on varying levels, and a combination of these elements are perceived by the listener to represent the essence of that particular piece of music. In the case of this disc, each of the artists involved has taken the essence of one particular Ange classic and come up with their own unique interpretation of it, and while many remain true to the original versions to some degree, it is generally unrealistic to young band in their twenties, living in the nineties to interpret this music in the exact same way with the exact same feeling as those who wrote it twenty years before. Why should they? If that's what is needed, then go listen to the original versions - which incidentally still stand strong to this day. On the other hand, if one is willing to detach themselves from the past and listen to this music through the interpretation of present day musicians, then these eleven tracks — in varying degrees — offer a look into the past via the window of the present. These bands feature a variety of vocalists, each unique unto their own but all influenced to some degree by Decamps, performing these classics utilizing the instrumentation and production techniques of today. Some of the tracks here seem to work better than others, some take the music into new directions altogether, and a few of these tracks even approach the power and passion of the originals.

The disc opens with Cafeine doing a powerful rendition of "Aujourd'hui c'est la fête..." originally from Le Cimetière des Arlequins, injected with a harder rock sound and modern synthesizers while backing lead vocalist Philippe Ladousse, yet as the song breaks away from the vocal section the spirit of the past leaps forward into the present with a well balanced passage for acoustic guitar and keyboards. When the final vocal passage returns, the change is abrupt and a bit abrasive, yet all things considered this is still one of the album's better tracks. Naos continues with a rendition of "Le Nain du Stanislas," a bit more punchy and irreverent compared to the original on 1975's Emile Jacotey, vocalist Phil Mottée lacking some of the emotive power of Decamps, yet making up for that shortcoming in raw energy. Musically, when they stretch out there is a strong neo-progressive feel — both in the drumming and the keyboards — that does little to hold my attention, and it's only when guitarist Lucien Pagano's solo steps in at the end that gets interesting again.

One of Ange's best was the album Par les Fils de Mandrin, and here Quidam have offered a respectable interpretation of the title track of that album. The contrasts between the softer and harsher parts of the original have been amplified, and while Philippe Maury's vocals are quite a bit more smooth and refined, yet the spirit of the original version is held. Next comes Raison de Plus doing a highly energized rock version of "Ballade pour un Orgie" from Au-delà du Délire. This is the first I've heard of this band since their Camel-esque contribution to the 1987 Musea compilation Enchantement; why doesn't this band do an album someday? Being that the original was essentially a ballad with no drums and a very spirited delivery from Decamps, this highly produced cover version lacks much of the depth and emotion of the original, yet it still works — if one can ignore that the original spirit of the tune has been altered drastically, this may be one of the compilation's better tracks.

Claude Demet was Ange's guitarist on the Guet-Apens album, following the departure of J.M. Brezovar. His contribution here is "Virgule," taken from that same album. The first thing that becomes obviously clear is that Demet is not a singer, and his inability to recreate many of the rich subtleties of Decamps original delivery make this one of the compilation's least successful tracks. Furthermore, the original 12-string parts which gave the original such an ethereal and delicate character have been replaced by simpler electric guitar and piano parts that give it an almost-country feel at times.

"Les Longues Nuits d'Isaac" might have arguably been one of the strongest pieces on Au-delà du Délire, reaching all the dynamic extremes, conveying these powerful emotions with biting electric guitar and gentle acoustics, rich with Mellotron and Hammond; in one song it contained the essence of what Ange was all about. By contrast — at least as far as the instrumentation goes, Alchimie offers an essentially lifeless, programmed sounding rendition, all very digital and overproduced, approaching annoying at times. Still, Yannick Cordier's vocals do hit the mark quite often, he is a good singer in the Decamps tradition. Those weaned on the digital sounds of the 80s and 90s may not share my complaints about this track, but from my perspective it's the most disappointing track on the compilation.

Like the earlier Raison de Plus offering, Galaad do a highly energized rock interpretation of the subtle "Aurélia," originally on Emile Jacotey. Here again, the spirit of the original is essentially lost, offering in its place a cover version that probably better captures the essence of Galaad. Their arrangements are spirited yet modern, vocalist Pierre-Yves Theurrilat does a remarkably good job conveying the emotional content in the quieter passages, yet with the louder parts he becomes a more typical rock singer.

Of all the bands on the compilation, Versailles seems to be the one most rooted in the sound of the seventies, using authentic instrumentation of the period and similar production techniques. Their rendition here of "Des Yeux Couleur d'Enfants" — a track I had almost forgotten from Par les Fils de Mandrin — although it lacks some of the dynamics of the original, comes the closest of any track here to faithfully reproducing the original, and vocalist Gilaume de la Piliere, while a bit less refined than Decamps, delivers the goods with remarkably similar energy and emotion — in fact while listening to this track back to back with the Ange original, I frequently became confused as to which version I was actually listening to.

Now is where things get really interesting. I had never heard of Abalip before, but apparently they have an independently released CD from 1993. Here they do a six-and-a-half minute version of "Capitaine Coeur de Miel" (the original from Guet-Apens was well over fifteen minutes) and although instrumentally this has a somewhat different emphasis from the original, using a more bottom heavy approach and saxes in addition to guitars, they have done it justice. Vocalist Charles Hubert is certainly up to the task, and although his style is a bit more raw and unrefined, he has taken his lessons from the masters. In fact I may actually prefer this version to the Ange original (I know... sacrilege!), it does convey much of the power that the original only hinted at, although its shortness leaves me wanting. Still, for my money this is clearly the album's standout track.

Another unfamiliar name here is Jean-Louis Bergère, who sings and plays all the instruments on his rendition of "Ode à Emile," one of Ange's finest tracks, originally from the album Emile Jacotey. Bergère does an outstanding job, laying down the acoustic guitar tracks with some light synth backing and unobtrusive drumming, some nice electric solos - developing an updated sound while remaining true to the essence of the original spirit — even the children playing at the beginning of the track. His vocals are not as smooth and emotive as Decamps, but he gets the feeling across adequately, doing some multi-tracking when necessary. Again, a very nice cut.

Last up is the master himself, Christian Decamps, with Jean-Pascal Boffo doing with an all new version of "Sur la Trace des Fées" from Emile Jacotey. The differences between this and the original are startling, yet the focus here is much the same, with Boffo's stark acoustic guitar being the primary instrumental support for Decamps' voice, which has now been moved even more to the forefront, rich with his unique emotional power. Christian adds some light symphonic keyboard textures in the background for added dramatic effect. All I can say is that this track must be heard and felt to be appreciated. This might be a good place to say that this reviewer only understands about every fifth word of French, perhaps even less in these songs. Decamps' voice has always cut right through any language barriers, appealing directly to the soul, the raw gut-felt emotion of his delivery being far stronger than the words that carry it.

In all, this compilation is a mixture of blessings. The Abalip, Decamps, Versailles and J.L. Bergère tracks stand the strongest; the Galaad, Raison de Plus and Cafeine (and to some extent the Quidam) are successful as well, although not always as faithful to the spirit of the originals (which is not so much a problem for me — if I want to hear the originals I'll just go and play them!), instead being spirited interpretations. The Naos, Alchimie and Claude Demet contributions are generally substandard, although this is not meant to be any kind of judgment of these artists' other works (which frankly I have not heard to date). In summary, it's a respectable tribute to the band that defined symphonic rock in France.