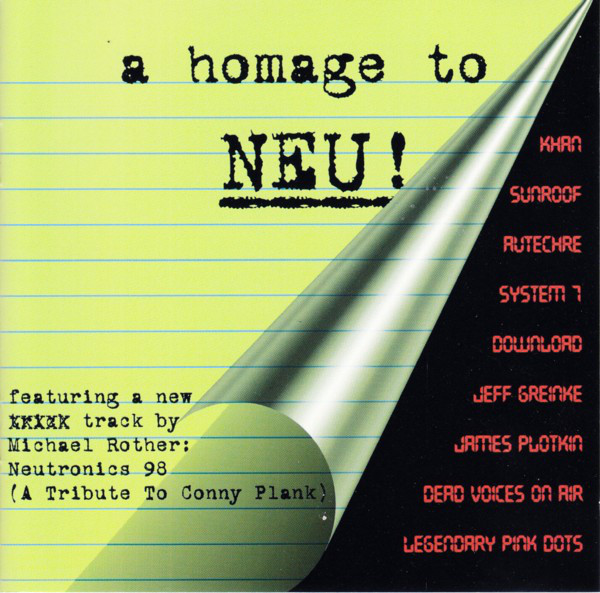 There have been far too many of these tribute albums over the past five years or so. Many of them have featured no-name bands performing pale imitations of their heroes from the days of old. After getting over my initial surprise that a Neu! tribute was even in the works, I didn’t really expect it to be any different. Man, was I wrong. Sure, there are a couple of tracks which fail to inspire, but on the whole this tribute is one of the very best this reviewer has heard. The inevitable inclusion of “Hallo Gallo” was given to Download, but the performance is a little bit too crude and coarse, lacking the fluidity of the original. Autechre, one of the biggest names in the realm of techno / electronica today, offer up a melding of “Weissensee” and “Im Gluck” which is satisfying, but it doesn’t really sound much like Autechre and is nowhere near as good as their own recent output. Steve Hillage appears with System 7 performing a tune called “Interstate” which is built upon a sample of “Hallo Gallo” but it favors a more cold dance-oriented approach. And that’s about it for the lowlights. Jeff Greinke closes out the set with a profound interpretation of “Im Gluck” in which he captures “its drones and environmental sounds and utterly slow movement” in a distinctly Greinke-like fashion. But, by far, the coolest thing on here is the first track, a new piece by Michael Rother himself entitled “Neutronics '98,” which he tributes to the late Conny Plank (since he couldn’t really tribute himself, could he?). Opening with a gentle, deep pulsating structure of synth and that signature guitar tone, it soon becomes washed over with a sea of distortion that almost gives it more of a Heldon spirit than Neu!. Even at nine-and-a-half minutes, “Neutronics” is about 50 too short. And that, perhaps, is the greatest tribute of them all. Ironic, eh?