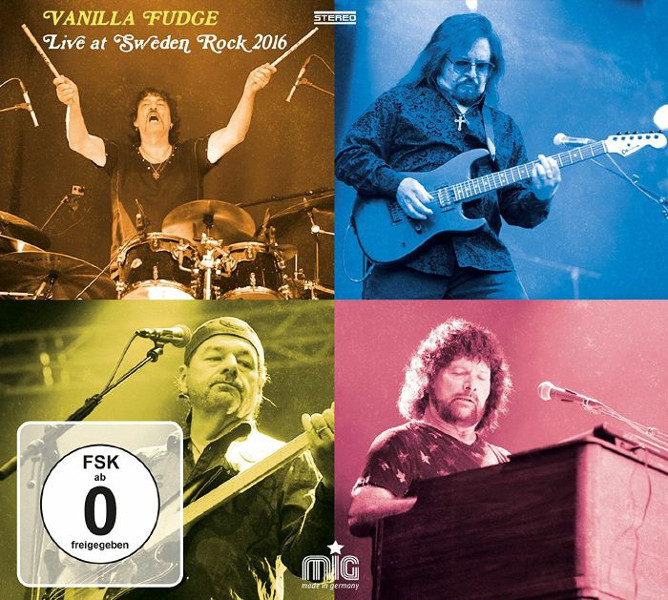 Two years ago in the quiet Swedish town of Norje near Salvesborg, 35,000 enthusiastic fans gathered to experience the heavy psychedelic presence of a band formed nearly 50 years ago, Vanilla Fudge. Vanilla Fudge made their mark of music by electrifying and psychedelicizing contemporary pop songs, with their greatest being “You Keep Me Hanging On.” In fact they already had three hit albums by the time Led Zeppelin toured the US for the first time and were Vanilla Fudge’s opening act. Vanilla Fudge’s unique covers of “You Keep Me Hanging On,” Jr. Walker’s “Shotgun,” and Paul McCartney’s “Eleanor Rigby” electrified a whole generation of musicians and fans, influencing bands such as The Nice, Deep Purple, Yes, Styx, Led Zeppelin, and Uriah Heep. Vanilla Fudge formed on Long Island in 1967 with Mark Stein, Tim Bogert, Carmine Appice, and Vince Martell. They broke up in 1970 and over the decades have reformed and broken up several times in different configurations. In 2009 Tim Bogert announced his retirement after a motorcycle accident. After all, the band members are now in their 70s. So they replaced Tim with New Jersey bassist Pete Bremy, a relative youngster who is now 65. To celebrate their 50th anniversary, Vanilla Fudge performed and recorded an 80-minute set that has just been released on CD and DVD. They kick off the concert with a cover of Neil Diamond’s “I’m a Believer” and Mark Stein’s voice is as strong as ever. Next is a cover of The Doors’ “Break on Through” with Mark Stein squeezing some crazed sounds out of his Hammond organ, along with Pete’s strong bass and Carmine’s percussion. Though not as raw as Jim Morrison, Mark’s soulful New York vocals carry the song. Next we are treated to their cover of Rod Argent’s “She’s Not There.” Their psych-soul cover degenerates into a clashing of instruments at the end. Then the band performs a song by Mark Stein from their 2015 album, “Pray for Peace.” Here the band relaxes with Mark singing to electric piano accompaniment, very much like a Billy Joel tune. The next is another original song, “Good Good Livin’” sung by Vince Martell, who also treats us to some tasty guitar licks. Now it is back to the cover tunes with Trade Martin’s “Take Me for a Little While” from their first album. Then they launch into a cover of Steve Winwood’s “Gimme Some Lovin’” and getting the audience to join in by clapping and singing along. This is followed by Jr. Walker’s “Shotgun” that lasts 12 minutes including a bit of “Greensleeves” before Carmine delivers a six-minute drum solo. Next is a slow bluesy rendition of Donovan’s “Season of the Witch” that they extend out to 11 minutes. This is a dark psychedelic jam with great work by all. And continuing in this vein, they perform an RnB psych cover of Led Zeppelin’s “Dazed and Confused.” Pete amps things up with his bass riffing. Vince makes no attempt to emulate Jimmy Page’s bowed guitar, instead he and Mark combine keyboards and guitar to replicate the lead line. Over the course of its 11 minutes, Mark shows his Hammond organ chops with some rapid runs. Then the song that everyone has been waiting for closes their performance, “You Keep Me Hanging On.” This a faithful rendition that the crowd loves and sings the refrain multiple times. The CD is great, but the DVD really makes the performance that much more personal and fun. Plus the chatter and banter between songs was edited out of the CD. Also, only for “You Keep Me Hanging On,” the videographers added kaleidoscopic and psychedelic pseudo-light show effects and many split screen shots. Quite an impressive performance sure to please audiences both young and old.