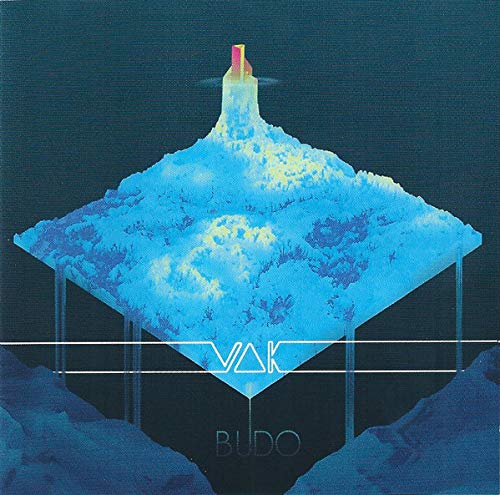 With a lean basic instrumental lineup of drums, bass and keys, fronted by female vocals, Budo is Vak’s second full length CD release – the first CD Aedividea from 2015 was actually a compilation of two earlier EPs from 2011 and 2014, and had I known about them back in the day I would have been singing their praises as well, but in fact I just learned about the band with this release. We are definitely folowing the path explored and refined by Magma and its many offshoots, in fact the label Soleil Zeuhl is completely dedicated to unearthing and promoting this kind of music, both new releases by current bands, which is exactly what we have here, as well as finding forgotten (by some) jazz-rock and zeuhl relics from the past that haven’t made their way to reissue. The band features singer Aurélie Saintecroix right up front, her voice an integral part of the band’s sound, mostly wordless. Drummer Vladimir Mejstelman and bassist Joël Crouzet are the keepers of the the growling and incendiary bottom end, the current that drives this music, and their ability to bring things up to a restless boil at will, and take it down to a smooth simmer when needed is the fuel that keeps it all going. Crouzet also plays guitars on the first two tracks as well (there are only three, guest guitarist Hyder Aga plays guitar on the closer, “Au Fond des Creuses”). Alexandre Michaan is the band’s keyboardist, an everpresent guidepost within their sound, mostly in the form of electric piano, supporting all the melodic structures therewithin. At almost 28 minutes, the opening title track is an aggressive and hard driving tour-de-force made even more powerful by the guest saxes (alto and sopranino) of Michaël Havard, presented seamlessly in three long sections, composed by Mejstelman and the band. Second up is “Hquark” in four sections, written by Michaan and the band, for all its 23 minutes it seems to take a slightly different twist compositionally with a more complex and restless experimental approach, and a more prominent role for Saintecroix. The aforementioned closer, by Mejstelman, brings the sound back to the more direct and aggressive approach of the opener, though shifting around a bit more, adding flute from guest player Nora Froger. All said, this is truly a ride through zeuhl heaven. Credit must be given to Michaan and Udi Koomran for for the mixing and mastering that make this complex and dense music sound so good.