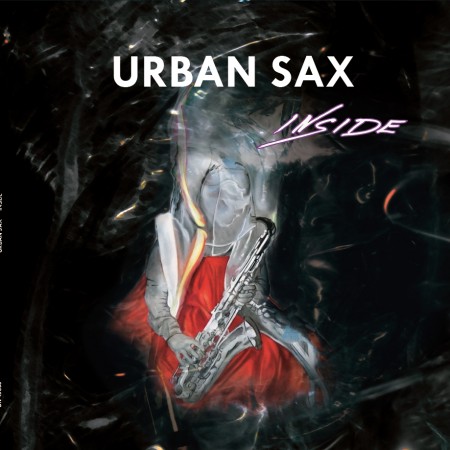 The saxophone is most often associated with jazz, a lead instrument that’s strong on melody and a potent vehicle for improvisation. Urban Sax puts all those ideas to bed. For those unfamiliar, Urban Sax is the creative outlet of composer Gilbert Artman, who started the group back in the mid-70s, and composes and arranges all of the group’s material. The “group” in this case is over 75 performers, consisting mostly of saxophones (the entire family from sopranino to bass), but also including clarinet, trumpet, cellos, vibraphone, glockenspiel, xylophone, gongs, electric bass, contrabass, electric guitar, harmonium, sitar, tamboura, an eight voice choir, and numerous dancers. Their compositions and arrangements use a more soft and orchestral approach, highly melodic and complex, with numerous interlocking saxophone parts playing over a sort-of floating textural backdrop of saxes and other instruments, punctuated by the percussion and intermittent appearances by the wordless choir. Their live performances utilize multiple stages some distance apart, typically in an urban setting with the architecture providing natural reverb and delay. Those familiar with the last full length album To the Happy Few from over two decades ago, and Spiral a few years before that, as well as the EP Urban Sax a Jakarta from 1995 should have a good idea of what to expect from Inside. The style is much the same, though growing increasingly complex and elaborate. The CD consists of eleven tracks, and the included LP mirrors the material on the CD. The DVD also features the same eleven titles, although they may be from a different performance, or at the very least an alternate mix – but with a highly creative juxtaposition of still shots, live video (often heavily effected) and animation, sometimes all superimposed; it is an amazing work of art unto itself. In addition, an extra 18 minute animated feature, “Urban Sax Virtual,” is included on the DVD. Everything is packaged in an LP sized cover with a 32 page full color booklet. It’s a numbered limited edition, and as one might guess, it doesn’t come without some financial sacrifice, but once you watch that DVD you will probably agree with me that it’s worth every penny.