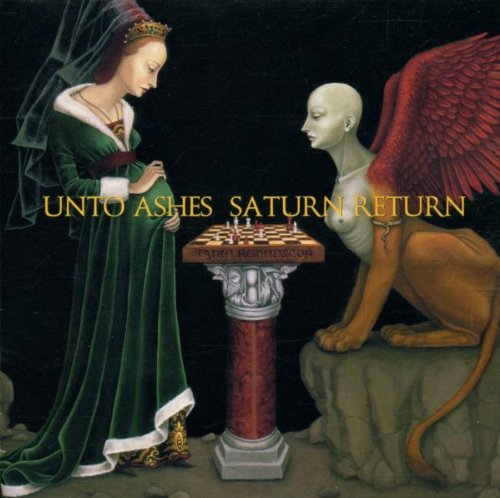 Goth-folk band Unto Ashes is now a quartet. Comprising vocalists / multi-instrumentalists Michael Laird, Melody Henry, Natalia Lincoln, and Ericah Hagle, the group primarily uses keyboards, percussion, and vocals, but several folk instruments, including dulcimer, saz, and tamboura appear as well. The fifteen tracks on Saturn Return show the same brooding, delicate melancholia as the band’s debut, Moon Oppose Moon: minor keys melodies, sparse instrumental arrangements, and lyrics that evoke the darker side of human experience and imagination. Many songs, like “Ein Fluch [A Curse]” and “They Killed Three Little Maids” recount bleak tales, while others show darker pagan influences (e.g. “A Hymn to Pan”, with lyrics penned by Alistair Crowley, and “Witches Ruin”). Another, “Serve Me”, offers and a rather morose take on master-and-servant eroticism. Only three tracks are instrumentals, and with four capable singers (three female, one male), the vocal parts are quite varied in style (sometimes operatic, sometimes chanted, etc.) The medieval / renaissance influences of the previous CD are even more pronounced here, both instrumentally (dulcimer, harp, etc.) and lyrically. In fact, several songs have their lyrics taken from Renaissance-era poems by Petrarch, Ronsard, and others. This isn’t baroque prog-folk à la Gryphon, though — the ethereal gothic touches, the heavy use of keyboards, and the presence of ethnic percussion, however, make Saturn Return more akin to early Dead Can Dance, Ordo Equitum Solis, or what Loreena McKennitt might do if she fell into a depression. Highly recommended for those who like this sort of thing.