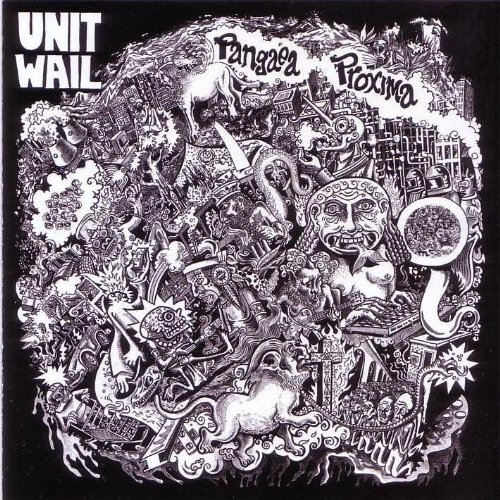 A new vision of darkness with some Zeuhlish touches, Unit Wail is a French five-piece playing the compositions of keyboardist Vincent Sicot Vantalon, twelve pieces in all, but also noteworthy is the membership of guitarist Franck-William Fromy, formerly of Shub Niggurath. Echoes of that band can be heard throughout Pangaea Proxima, that angular tortured guitar sustain that was their trademark crops up with regularity through Fromy's playing. In addition to Vantalon, there is a second keyboardist Emmanuel Pothier, and the rhythm section of Philippe Haxaire and Adrian Luna on drums and bass respectively. The hyper-busy drumming and throbbing growling bass do recall elements of the Zeuhl sound, but this is by no means a 'Magma' style band, there’s just too much else going on here. If there are any similarities with other bands, Present might be a valid reference point. With the exception of some spoken parts, the album is entirely instrumental. There are passages of soaring melodies also ("Outerspace" is a fine example), and given that this is a dual-keyboard band, there are plenty of moments that wander slightly into electronic territory, but never get carried away due to the solid anchoring that the rest of the band provides. There's a lot here for an adventurous listener to like, but it's a journey of many plays to know it well enough to know what’s coming next. After over a dozen plays, I'm still finding new surprises around every corner.