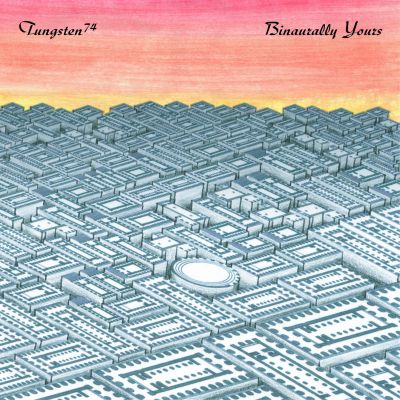 Binaurally Yours is the fourth release from Tungsten74. The group is a three-piece guitar / bass / drums outfit, but plenty of synth sounds abound. As opposed to all their previous releases, this album doesn’t consist of improvised music. According to the band, not only are the songs on Binaurally Yours composed, they were all created by picking, slicing, dicing, hacking, and otherwise altering classical music score source material. The synth-heavy “Rusty Cavalier” pieces that open and close the album are based upon the opera by Italian composer Pietro Mascagni and are the only classical sounding pieces on the album. Judging from the name, “Come Sweet Death” probably evolved from the J.S. Bach piece of the same name. This all acoustic and slide guitar piece is cool, but Bach probably wouldn’t have approved of the simultaneous major and minor thirds! “Fire Alarm” is an aptly named fast rock song. The main riff and many of the guitar parts in this track sound like The Police. During “Waltz” and “Absolutely”, the guitar tones are heavily processed and at times Tungsten74 sound like they could be a jam band version of U2, complete with delayed melodic guitar lines and traditional rock chord changes. These longer pieces build slowly and have repeating pattern bass/drum parts over which the song gradually develops. This album has a lot of diversity. It opens and closes very reservedly, but in between it has everything from space to rock to jam to ambient to noise.