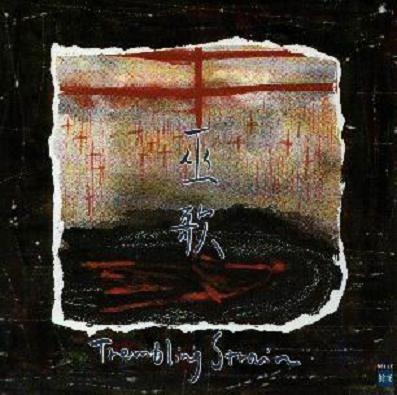 Hiroyuki Shimada, a.k.a. Pneuma, now reappears in the 90s in completely different guise. He now fronts Trembling Strain, the only ethnic-oriented (for lack of a better term) ensemble I know of in Japan. They manage to create a very spacious sound using only acoustic instruments. It just goes to show how much can be accomplished without even touching electronics. One of the most curious elements in their bag of tricks is how they orchestrate the music. Each piece on Anthem to Raise the Dead makes use of a different set of instruments or sounds, and sticks to it for the duration. On "Funeral March" we find mainly voice, bell, cello, and hand drums. For "In Dreams We Are Together" it's harp, hand drums, and voice; still elsewhere, voice and rain stick, or voice, strings and Japanese instruments. What is so amazing to me is how sparingly they use these tonal colors. I also like how they approach the vocals; muted and obscured most of the time, rendering them unintelligible. It is not dissimilar to what Takami did on her Y. de Noir II album. (Or maybe even Univers Zero's "La Faulx"). Trembling Strain takes you to another world, one of magic and strange ritual, where eerie voices beckon from subterranean caverns. The music embodies a decidedly Japanese aesthetic embracing stillness and simplicity much like Noh theater perhaps (admittedly in danger of becoming monotonous at times). This group could play the role of kindred spirit to Takami. It's no mystery why they are associated.