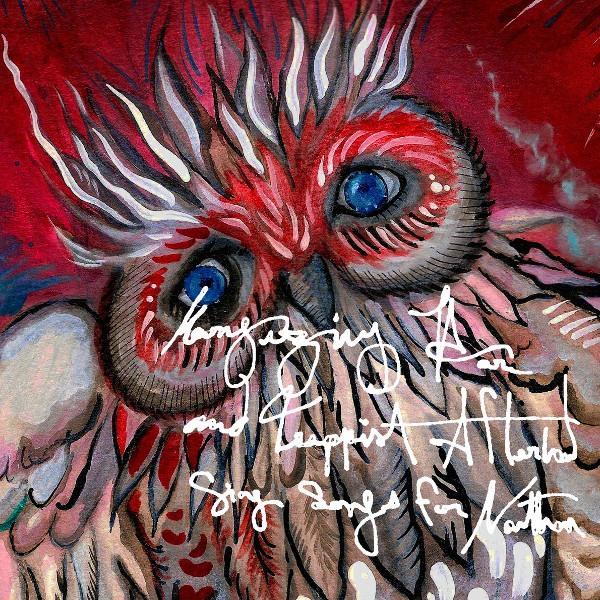 Songs for Nathan is the long distance friendship / split release by Australia’s Trappist Afterland and Denmark’s Moongazing Hare. The album title refers to Active Listener’s Nathan Ford, an on-line blogger. Nathan was an active supporter of both bands over the last few years. Adam Geoffrey Cole (Trappist Afterland) and David Folkmann Drost (Moongazing Hare) wanted to express their gratitude to Nathan with this album and to also in some small way help Nathan and his family. Initially released by Active Listener, the proceeds from the album were donated to Nathan and his family to help while he recovered from his cancer treatment and he is now doing better! In June 2018 Sugarbush Records reissued this album on audiofile vinyl with three extra tracks that did not appear on the CD, with Trappist Afterland contributing six songs and Moongazing Hare five. This fine album of acid folk / gothic folk opens with Moongazing Hare’s mournful “Fine Horseman,” a ghost lit ballad whose shadowy entrancement creaks with a magical hush. Next is a wonderful contrast with Trappist Afterland’s “Restless Day,” a psych drone fest with sitar and reversed tapes, a hybrid of Incredible String Band and George Harrision. Trappist Afterland’s “Sleep on the Tide” follows with more reversed tapes, drony vocal harmonies, and acoustic guitar to created a melodic acid folk ballad. Then we switch back to Moongazing Hare with his haunting deep forest vision of rural America “Stars of the Wraith.” Next is Trappist Afterland’s mystical trance inducing “The Penitant’s Rail” followed by Adam’s fantastic cover of Syd Barrett’s “Opel.” Side Two opens with Moongazing Hare’s “1 John 4 16,” which on the surface appears to be biblical reference, but it definitely is not. This is a very pleasant song of hope, while its connection to the song title remains a mystery to me. Trappist Afterland’s “Traps of Gold” is next with reversed tapes of his acoustic guitar running in counterpoint to Adam’s vocals and additional guitar. Then we encounter Moongazing Hare’s beautiful “Your Drink,” another exquisite example of acid folk with some understated synth accompaniment. The final Trappist Afterland song is “Father = Sun Itself,” a ritualistic slow chant. And the album closes with Moongazing Hare’s “Sundayland Lights.” This song has a steady 96 bpm heartbeat that supports a mournful song about the death of a lover and how the surviving partner will be able to continue through the grief. Songs for Nathan is a labor of love well worth investigating.