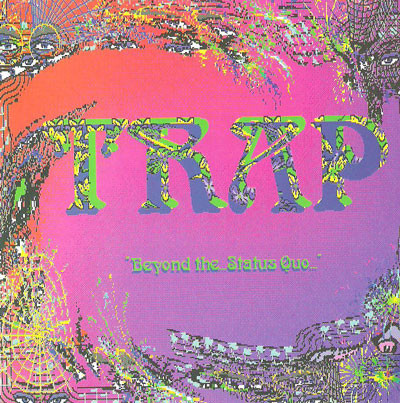 The swirling multicolored psychedelic booklet cover belies the playful avant strangeness of this, the first release on Gazul, Musea's new side-label for more 'challenging' music. Trap is Gary Parra, former drummer with PFS, and Cartoon before that, along with Spaceship Eyes members Don Falcone (synths, bass and trombone), Karen Anderson (voice) and John Kuntz (guitar, mandolin, ukelele), as well as former Cartoon / PFS members Craig Fry (violin), Herb Diamant (sax, flute, bassoon), and Scott Brazeal (piano, synth), plus several other guests. We reviewed a very early demo version of this a couple years ago, before all the arrangements had been fleshed out and mixed down, and before a couple of poorer tracks were dropped in favor of some newer ones that were far more interesting. What we have now is a strange and shimmering gem that defies easy description and categorization. A volume of influences went into these twelve tracks, some pretty overt like Zappa and King Crimson (titles give that away), some not as obvious (free jazz, classical, Happy the Man, Henry Cow, Pink Floyd, Euro-folk, John Cage, and the list goes on...), but all are well assimilated into this wild party stew that Parra has concocted. No two songs here even sound like they were made by the same band, let alone off the same album. Each track has, above all, its very own personality, which gives the overall effort a strong sense of variety — maybe too much at times, but nothing a few listens couldn't take care of. In all this is a fairly accessible album — the humorous elements of tracks like "Double Barrel @ 184," "Romanian Circus," and "Consecutive Rhymes" and the vague familiarity with "Zappazone" and "Crimson Moon" help to break the ice while the others in between are sinking in subconsciously. A fun release that all should check out.