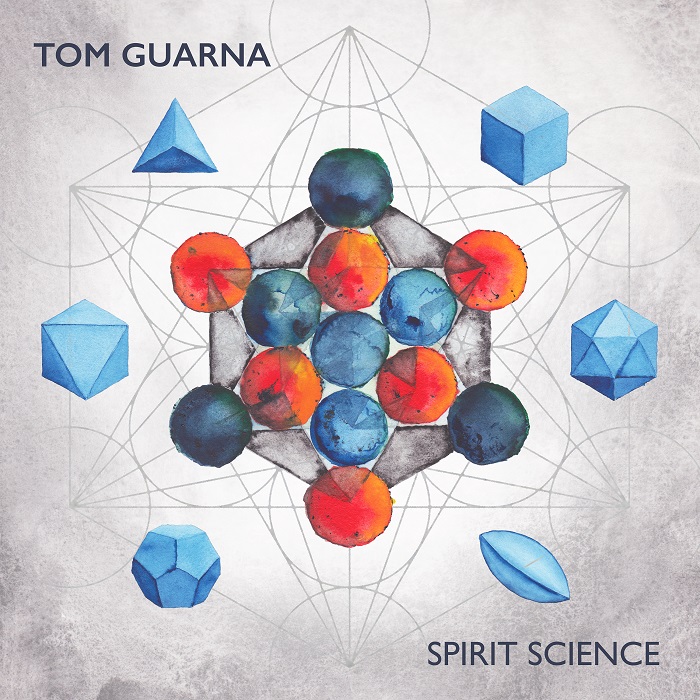 Tom Guarna is a guitarist and composer based in New York City with over half a dozen previous releases, here fronting a quintet featuring keyboardist Aaron Parks (piano, synth, Rhodes), bassist Joe Martin, drummer Jason Faulkner, and reed player Ben Wendel (tenor sax, bassoon). As enjoyable and melodic as this purely instrumental jazz outing is, it doesn’t really sound like an album by a guitarist — which is not necessarily a bad thing, instead highlighting Guarna’s role as the composer and arranger throughout, with the other members providing most of the solos, with special note going to Wendel and Parks for most of the melodic action within the grooves, but the compositions are interesting and often even stunning. That’s not to say that Guarna doesn’t show his amazing chops, and he is a truly gifted player and soloist whenever the spotlight crosses his path, but primarily the nine tracks on Spirit Science highlight his role as composer, bandleader, and arranger, and not a guitarist who hogs the spotlight, and that approach is truly commendable. The seven minute opener, “The Trion Re,” has Guarna doing a beautiful unison melody with Wendel before the latter breaks out for his own solo, followed by Guarna and the others, including a beautiful and gently touching piano solo by Parks that changes the direction of the piece completely, eventually coming back to that haunting opening melody. Throughout, the compositions are inspired by sacred geometry laws which are said to pervade everything in existence, and I suppose that would be true of any structured music, but at least Guarna is thinking about it consciously. The gentle opening passage of “Two Circles” introduces one of the album’s standout numbers, with a positively stunning melodic figure by Wendell’s sax with Guarna supporting, followed in solos by both, while Parks’ animated piano figures adorn the piece beautifully. The gently lilting “Lullaby for Lena” closes the set in waltz time, a bit different than any before it, but no less exceptional. All taken, Spirit Science makes for inspired listening at many levels.

Michael Mantler / Edward Gorey - The Hapless Child and Other Inscrutable Stories – It's a rare project that extracts elements of the written word and transfers them eloquently to an audio performance. Composer/trumpet player Michael Mantler's first major success with this...  (2000) » Read more