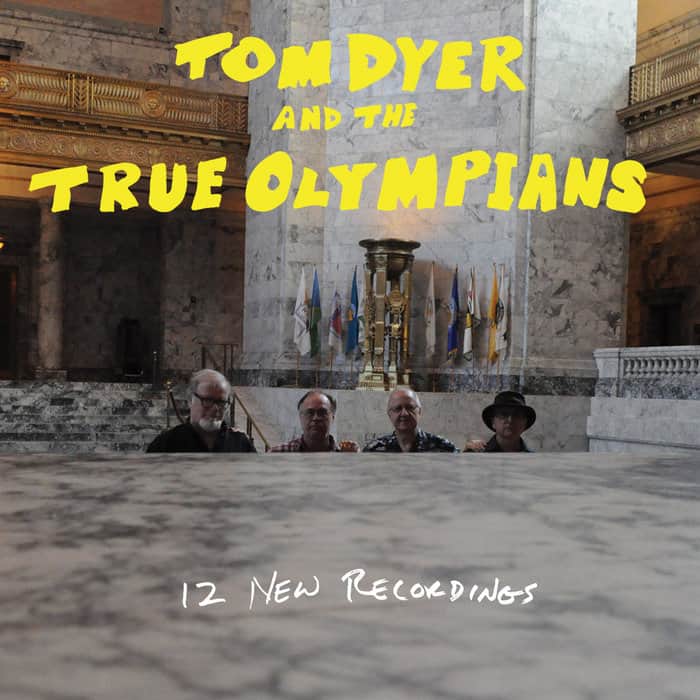 When a catchy garage rock song is grooving along, and you notice that the lyrics are talking about Antonio Gramsci, you know this is no ordinary rock ‘n’ roll band. That’s “Hegemony” by Tom Dyer and the True Olympians, the latest project of Northwest rock mainstay Tom Dyer. He’s relocated from Seattle to Olympia — hence the band’s name — and has been energized by the current political climate in the US. So while you’re thrashing around to these catchy rock beats, you can, if you choose to sing along with the lyrics, speak out against corporate power, white supremacists, greedy one-percenters, intolerant religious fanatics, and so on. Not that all of the songs are political, or that the political ones are especially preachy — they come off as sincere and sometimes frustrated or angry (in the best punk tradition). Even “The Ballad of Donald John Trump” spends much of its time simply listing its subject’s actions. There are also songs like “Random Acts of Kindness,” “Another Counting Song,” and “In the Light” which touch on a variety of subjects. Musically, while the ground floor is solidly on a foundation of fuzzy garage rock, there are plenty of variations and embellishments that build up, often courtesy of a good old Hammond organ. “Wibblin’ for Jesus” uses a gospel rock style to skewer the hypocrisy of many Christians. “Random Acts of Kindness” uses some pseudo-jazzy chords and “la-la” backing vocals to impart a bouncy late-60s feeling. “In the Light” has my favorite riff on the album, one of those twisty riffs that tosses in some outside notes to keep listeners a little off base. 12 New Recordings is a fun set of tunes by a band that knows their stuff, working within traditions set down decades ago but not bound by them, engaging the head for both rocking and thinking. Brushing up on Gramsci is optional.

California Guitar Trio - Echoes – CGT are back to what they do best: arranging covers of classic rock in their own inimitable style. Doing up the classics is part and parcel for the ensemble with two of Beethoven’s well known...  (2009) » Read more