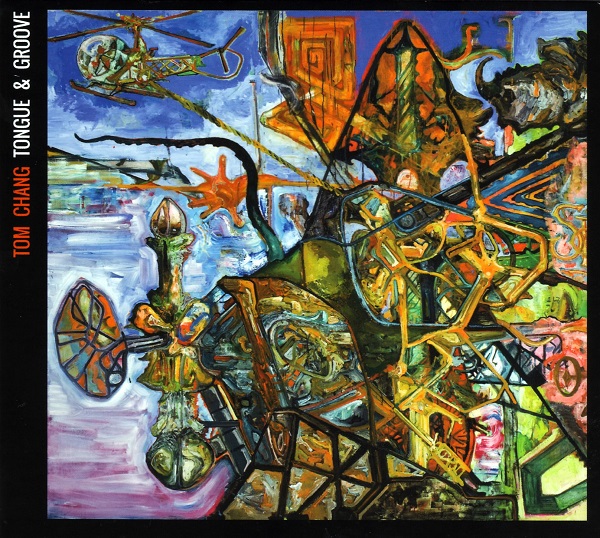 Here we have an album by a jazz guitarist that features Indian percussion, but takes a completely different path than John McLaughlin with Shakti. This is more of a jazz recording that features Indian elements (including rhythmic ideas); in addition to the guitar, two saxophones provide melodic elements and solos. The saxes, by Greg Ward and Jason Rigby (alto and tenor, respectively), are utilized well, often with interlocking counter-melodies rather than harmonizing with each other — at times I was reminded a little of Steve Coleman's music. Chris Lightcap plays acoustic bass, giving the proceedings a spacious underpinning in conjunction with Gerald Cleaver's drums. Percussionists Askshay Anantapadmanabhan (kanjira and mridangam) and Subash Chandran (konnakol vocal persussion) are not present on all tracks, but when they are, they fit right in. As for Tom Chang's guitar playing, the last time I was so impressed by my first hearing of a guitarist was Timothy Young in Dylan Ryan's Sand. The first track here is called "Spinal Tap / Goes to 11," so you know he's not an old-school jazz guy. But neither is he a flashy fusion player, but more along the lines of Bill Frisell, Nels Cline, and the previously mentioned Timothy Young. His rhythm lines are jagged and unpredictable, full of tasty touches of dissonance, volume-pedal swells, and whammy-bar dizziness. Even on "Bar Codes," which has a strong basis in blues, he comes up with inventive and delightfully strange lines. Another testimony to his originality is the single cover on the album: Anton Webern's "Variations for Piano Op. 27" — that's not something you encounter every day! Tongue & Groove is one of the finest jazz guitar releases of the year, and sets a high bar for Chang to top on his next recording.