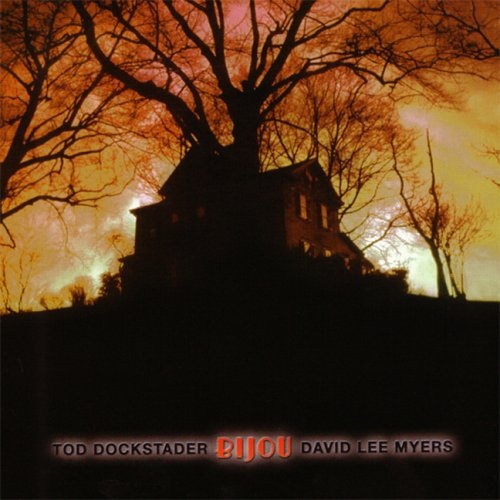 Tod Dockstader is one of the grand old men of electro-acoustic music, and on Bijou he is teamed with David Lee Myers, who performs on “feedback machines.” From the cover to the booklet to the musical effects, this is an audio horror soundtrack, something suitable for a dark, chilling tale. Not in the stereotypical sense of a Goblin album, but rather through use of feedback, sound effects, and manipulated tapes to create an ominous, foreboding atmosphere. Snatches of conversation, a telephone ringing and answered, creaks and bumps all are used to evoke a dark ambience, broken intermittently by jarring clashes of noise, equivalent to the surprise strike of the attacking psycho picking off victims one by one. After 25 episodic pieces we roll the credits (in a weird, Dockstader sort of way) and that’s a wrap. What is interesting about Bijou is that it allows a new twist on an old compositional technique. There is a lot of electro-acoustic/concrète music around by now, but most of it exists as its own endpoint. Bijou uses the tricks of the trade to send up old horror movies and provide a unified, thematic listening experience. The end result is pretty cool.