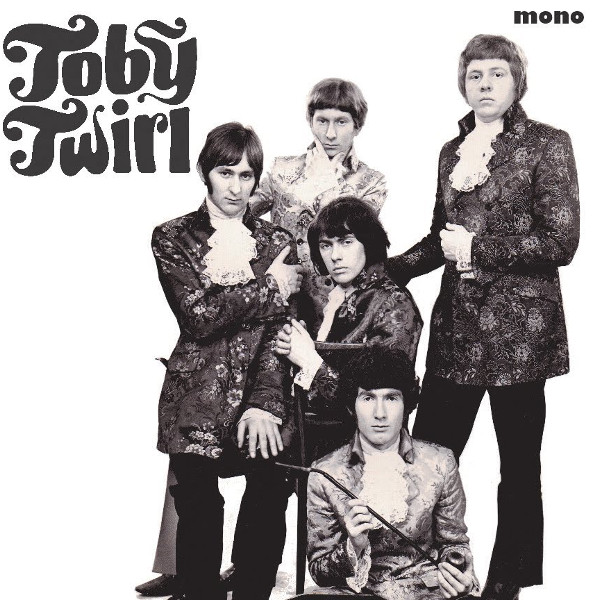 Toby Twirl was a British mod band formed in 1968 that lasted about three years, chasing but never catching that elusive fame. In retrospect, they arrived on the scene too late, considering that music had exploded into many new directions at that time, rapidly distancing itself from the mod-pop of the mid 60s. Sgt. Pepper and Magical Mystery Tour were already released, Cream had released Wheels of Fire and were breaking up, with Blind Faith appearing in 1969, Led Zeppelin had already released their first album, the Allman Brothers were gaining notice, King Crimson had made its debut, Krautrock was flourishing in Germany, and the Summer of Love and Woodstock with Joe Cocker’s debut was taking America by storm. I can imagine trying to compete in this new musical environment must have been difficult. Toby Twirl did their time playing live in multiple British clubs, playing mostly cover tunes with a handful of original songs. They were able to record a couple of 45 rpm singles, but never a full length LP. The band had made several demos and showcase recordings at various studios in the late 60s, but everyone thought that they had been lost forever. One day, drummer John Reed chanced upon a dusty box of reel-to-reel tapes in his attic that turned out to be tracks recorded by the band. These tapes have been carefully restored and will be released in October 2017 as the first official Toby Twirl 180 gram LP. Side 1 features songs with vocalist Dave “Holly” Holland and Side 2 features vocalist Steve Pickering. The music will also be released on CD with three bonus tracks. The sound quality varies from the muffled “Toffee Apple Sunday” and “Hollies Medley,” the tinny “Baby What Good Is Love,” to decent studio recordings like “Movin’ In.” Of the fifteen songs presented, six are original tunes which evoke comparisons to The Cowsills. Back in the late 60s bands tended to cover a lot of popular songs to please the crowd, which is apparently what Toby Twirl did without really putting their stamp on the tunes. Included are covers of two Beatles’ songs (“Baby You’re a Rich Man” and “Something”) that are decent copies but make you want to hear the originals, a lackluster cover of Steppenwolf’s “Born to Be Wild” that doesn’t quite have that “heavy metal thunder,” an excellent cover of Joe Cocker’s hit “Marjorine” that can stand on its own, a pop-psych reading of The Everly Brothers’ “When Will I Be Loved” with a proto dub sound, a rocking version of The Easybeats’ “Gonna Have a Good Time,” a cover of Guess Who’s “American Woman” that they really could not pull off, a simple walkthrough of the Rolling Stones’ “Let’s Spend the Night Together,” and the final track, “Hollies Medley,” that is a seamless integration of “Here I Go Again,” “Just One Look,” and “Sorry Suzanne.” Perhaps we expect more from bands today that cover iconic tunes, but back in the 60s these songs had not reached that status yet. This archive recording will probably only appeal to those who grew up in the 60s and experienced Toby Twirl first hand.