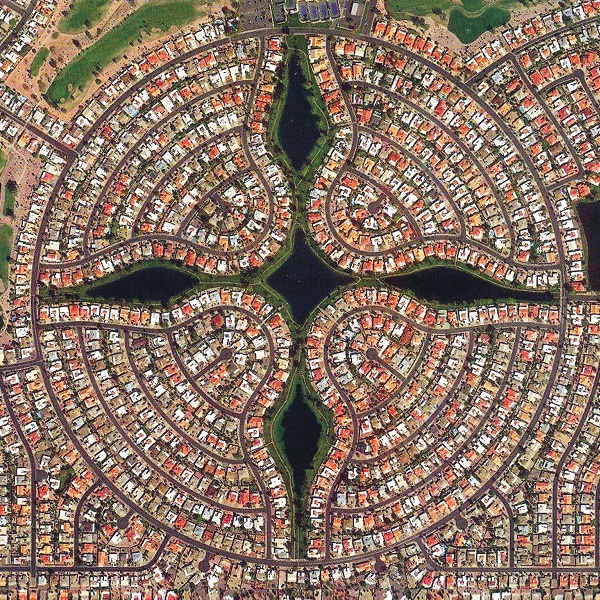 Three Thirteen is the pseudonym of multi-instrumentalist Mark Harrell, not to be confused with California’s heavy metal band with the same name. Their respective musics are worlds apart. Mark sites many points of musical reference, but the only one that makes sense to me is Pat Metheny. Mark composes and plays very smooth New Age Contemporary jazz-fusion music. Unfortunately, I do not think that I can do the music on this CD justice. It is too smooth and gentle for me. I hate to say it, but the most interesting aspect of the CD is the cover art. From afar it looks like a beaded design. But on close examination it resolves into an aerial photo of a housing development in Sun Lakes, Arizona, a suburb of Phoenix. A few of the eleven instrumental tracks start out interesting with sonic elements like crowd sounds, a train station, woodland birds, etc. but then the music enters and these moments of interest evaporate. Overall this disc is chock full of excellent and relaxing background music that tends to sound the same to me. Mark used to play drums in a band in his early career, but he may have grown too insulated as a solo artist. His music is missing that edge that comes from interacting musically with other musicians. Even though the promo material for Depletion Region states that Mark drew on rock, pop, classical, and jazz to create this album, the end result really does not fit into the type of music we normally cover on Exposé.

“Reflection of Day” is the first track on this CD, and when I first heard it, I was reminded of something Anthony Phillips might have come up with as a mellow interlude for a late-70s album. The arpeggiated chords on 12-string together with a simple piano melody would fit on Wise after the Event or Sides, though I doubt Phillips would have carried on with it for over six minutes. While there is some variety on later tracks, the opening is representative, with acoustic guitar (picked or strummed) backing relatively simple keyboard parts, with drums keeping basic time (usually in 4/4). Occasionally a twist like the backward vocals on “All the While” provide a nice touch. But it’s all very polite, pretty, and smooth, without any touches of dissonance, rather like canned soundtrack music for industrial films or documentaries. “Illusionation” sets up a catchy riff in 6/4, but manages to avoid making it really jump out by swamping it in keyboards – a couple of moments approach a nifty Happy the Man kind of complexity, but tone it down and mellow it out. “The Blasted Plain” provides the brightest spot, kicking the tempo up a bit with a driving 7/4 rhythm and an electric guitar melody that almost cuts loose; in the middle section, there’s some percussion and chanting and a little bit of weirdness, but it doesn’t last long, returning to tamer stuff for the remainder of the piece. In the end, Three Thirteen presents a style modelled on something like Camel’s mellower, prettier moments, without the contrasting bluesy or rockish parts (admittedly, Camel has done this on some albums).

Alliance - Alliance – Alliance appears to be a group of musicians (while maybe not a band as such) working together in various combinations to produce the music on this disc, around the core of John Fahey (keyboards and...  (1994) » Read more

Sigmund Snopek III - Virginia Woolf – Well, leave it to Peter Wustmann of WMMS to unearth something so totally obscure and unclassifiable that time had nearly forgotten about it. Sigmund Snopek III and the Bloomsbury People existed in the...  (1995) » Read more

Malombra - Our Lady of the Bones – This album has some great song titles: "Dedicated Dopamines Dance," "Requiem for the Human Beast," "Sinister Morning." Excellent! Also of intrigue is that one track,...  (1997) » Read more