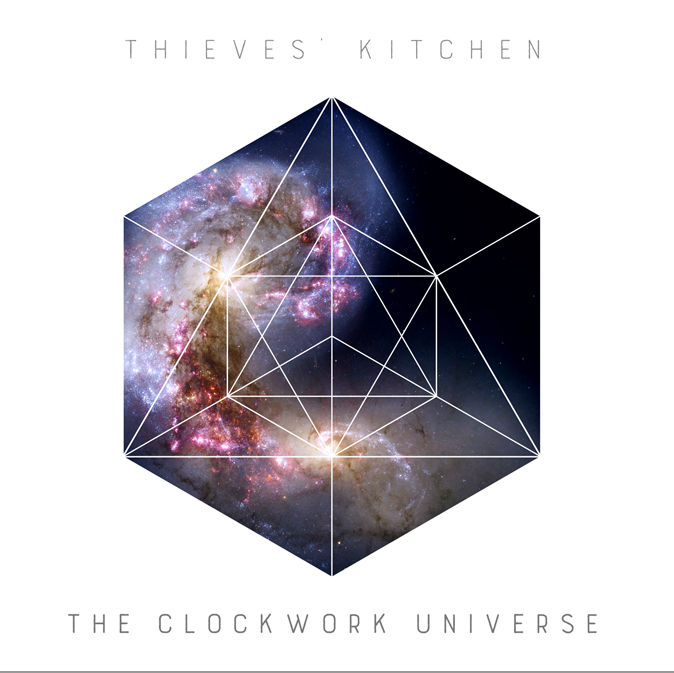 As a Thieves’ Kitchen newbie, listening to The Clockwork Universe starts out as a game of Spot-the-Influence: a bit of Yes here, Renaissance there, Änglagård now, Genesis later… but then it occurs to me that all of that is pointless and irrelevant. This really is an original blend. I can’t say if it’s the same blend they’ve been brewing since their beginning more than 15 years ago or if it’s an evolution or a new thing. One way or another it just works. The first thing you hear is some very subtle volume-pedal playing on the guitar, then Amy Darby’s beautiful voice and an electric piano. Neither the guitar nor the keyboards are playing simple chords, but some nicely sophisticated stuff reminiscent of something like Hatfield and the North. As things develop, Phil Mercy’s guitar develops some really tasty parts, whether legato countermelodies or soaring leads with a touch of wah-wah. Thomas Johnson’s keyboards encompass electric piano, organ, Mellotron, and classic synth sounds, and masterfully blend complex arpeggios, massive chords, and jazzy voicings, knocking them several notches up from so much of the retro-vintage work you hear these days. The rhythm section really works it too, with Johan Brand’s bass often slightly overdriven, though not as heavy as he gets with Änglagård; drummer Paul Mallyon is one of those guys whose playing just fits perfectly, not really jumping out at you, but full of tasty accents and avoiding cliches. The last part of the equation, personnel-wise, is Anna Holmgren’s flute, which gets less time than I might like – when she does appear, she provides a perfect touch of breath and warmth. Of course, the best musicians in the world are wasted if the compositions are dull, but between the words of Darby and the music of Mercy and Johnson, Thieves’ Kitchen has no worries in that regard. The lyrics are imagistic and intelligent, with unexpected phrasing and unusual metaphors, references to science and technology, and realistic emotions viewed in interesting ways. Darby also manages the difficult task of having a beautiful vocal tone but not coming off as bland, overly sweet, or stagey. Aside from giving some recognition to Mercy’s guitar work (dexterous and unpredictable), I’ll just say that my hope for progressive rock’s future is brightened a bit by hearing The Clockwork Universe.