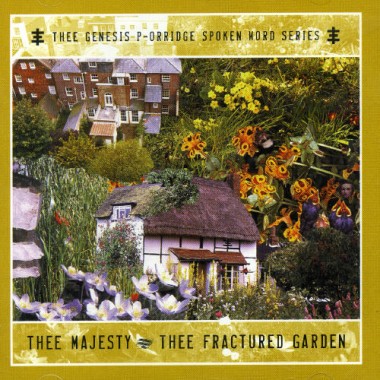 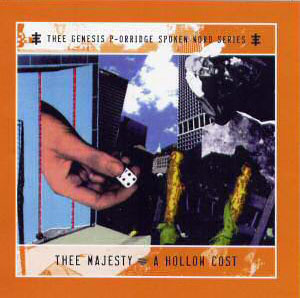 The incarnations of Genesis P-Orridge continue to manifest in many different and sometimes compelling ways. Two of the composer’s spoken word series are reissued here by Voiceprint in part to give the poetic raver room to espouse his own view of the world backed by a relentless techno backdrop. Thee Fractured Garden is a bit low-fi, but endearing nevertheless as P-Orridge has much in common with 70s counterculture, Dave Brock and Daevid Allen than one would previously believe. “A Debris of Murder” relates a tentative rant over a subtle bass and drum vibe with congas. “Avatar” is perhaps the trippiest piece on the disc as looped Mellotrons give a slight psychedelic feel in a swirl of sampled bird formation. “Freedom is a Sickness” relies on a quiet drone for the poet’s musings on birth and an individual’s human rights for their gothic pursuits of happiness. P-Orridge’s imagery is often bleak and depressing, but there are a few surprises in the mixes as on “Thee Meeting Ship” where rotated glass provides a loop for more of the artist’s seemingly formless ramblings. The last seven tracks are devoted to a segue of monologues that focus on outer worldly perceptions. Watery backdrops are also utilized to great effect with “dreams...” chanted repeatedly that also creates a hypnotic atmosphere. “S/he is Her/e” is the most rhythmic backing track on the disc with also the most ominous delivery from the composer. In contrast, Larry Thrasher lends a large hand to the artist on the 76 minute track entitled “A Hollow Cost” originally released in 1994. Subtitled “A Spoken Word Revelation” the tone initially created is not far removed from Ummagumma era Pink Floyd. “The Only Joy Is Violation” tirades eventually wash away into a water sanctuary section of the track about ten minutes into the piece. It doesn’t take long for the moment to change into something more sinister with Thrasher’s synth layering echoing more seemingly coherent ramblings. The scariest part of the track happens about mid-way through with crystalline scratches dominating a wordless ambiance. The track finally closes on what sounds like an open field where a riot is taken place; one can easily imagine people running, screaming in a frenzy. Overall it’s clear that P-Orridge has created a career for himself alongside peers such as Tom the Poet and Roy Harper’s spacey poetry. Fans of later Hawkwind, Mother Gong, trance, and techno will all have something to champion in the course of these two discs.