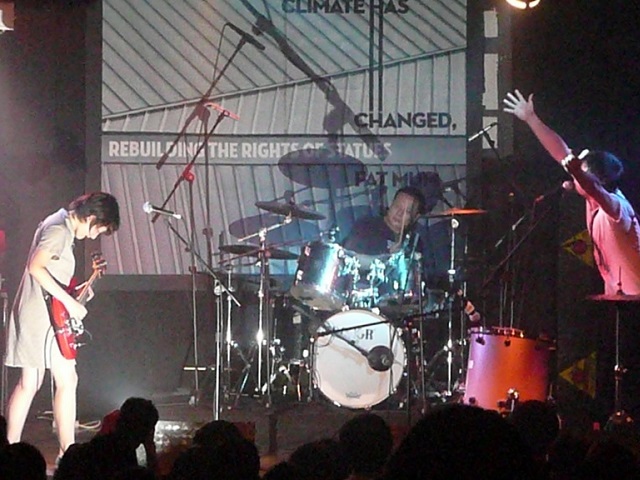 This is one of very few Chinese bands which is available on CD in the US. Their first album, Cut Off!, was released by Tag Team Records, and they’ve toured in the US, including a spot at SXSW in 2007. Their first album lists their full name as Reestablishing the Rights of Statues – later items have called them Rebuilding the Rights of Statues. The Chinese version is 重塑雕像的权利 (chóngsù diāoxiàng de quánlì), which can be translated either way.

Note: This piece was originally published on my Rocket to China blog back in 2009. Since that site is more or less defunct, I've updated the post and brought it to Exposé to make it more accessible.

Part of a series dealing with rock music in China, mostly Beijing because that's what I know. 摇滚 (yáogǔn) is the Chinese word for rock music, the two characters literally meaning "shake" and "roll". 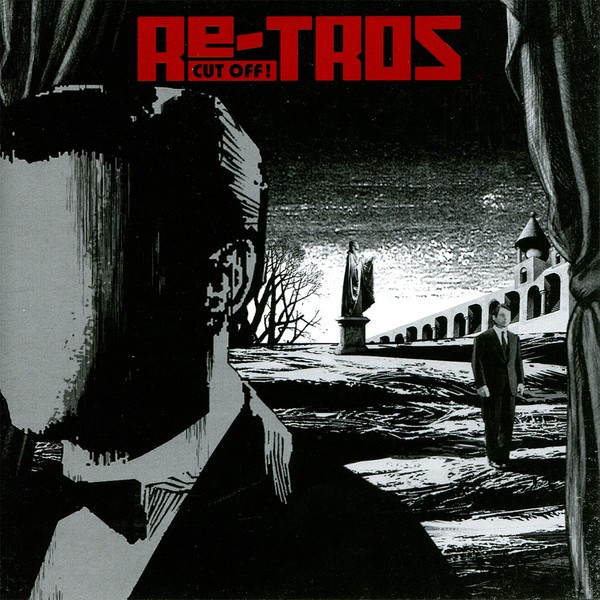 That American release (actually an EP) is a 2007 re-release of something that came out in China on Badhead Records (a division of Modern Sky) in 2005 with one added track. Both are called Cut Off! I have the Chinese version. As the story goes, Brian Eno was working in the same studio where they were recording, liked their music, and ended up doing some guest keyboards on some of the tracks.

Stylistically, they are most closely related to Gang of Four, Bauhaus, Joy Division, Pere Ubu and early Talking Heads, though they are distinctive enough to avoid any charges of being mere copycats. Their lyrics are almost entirely in English.

Perhaps the most overtly rebellious song they've recorded is "TV Show (Hang the Police)," which, if it had been sung in Chinese, would likely never have seen the light of day. There's also a video for this song, which you can watch online:

I first saw them live in November of 2007 at a little club called 2 Kolegas, which is a great place located inside the grounds of a drive-in movie theater, along with a number of other bars and restaurants. It was my first time going to the place, and it was not easy to find. The taxi driver had no clue (at that time I spoke very little Chinese), so it was lucky I’d looked at a map and knew the general location. There were four bands on the bill, starting with RandomK(e), Subs, then Re-TROS, and finishing up with Hedgehog. 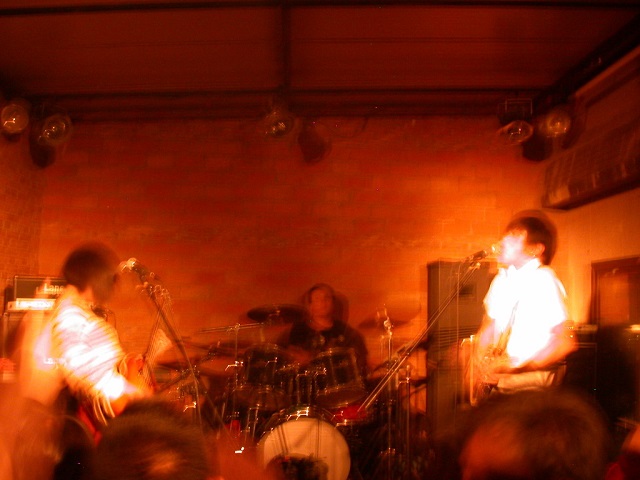 Re-TROS put on an amazing show, very intense with energy and commitment, probably including imperfections but much too enjoyable for me to care.

The lyrics, which deal with social issues bordering on politics, were pretty much indistinguishable. Lead singer 华东 (Hua Dong) is extremely emotive in a jerky David Byrne kind of way. Bassist Liu Min (刘敏) is less demonstrative, providing solid low end and backing vocals. Ma Hui (马晖) is mostly simple but quite imaginative on the drums, with lots of unconventional patterns and unexpected accents.

This configuration, a trio with at least one female member, is oddly typical of Beijing bands, with Hedgehog, Carsick Cars, Snapline, and several others being examples. 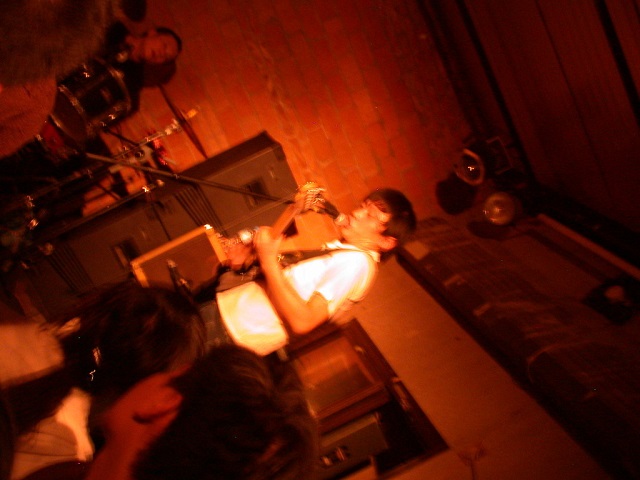 They set up on stage with Hua and Liu facing each other rather than the audience, which gives the impression that you're catching something more like a rehearsal than a performance, like they're in their own living room instead of a public venue. They seem wrapped up in the music, in their own world, and not concerned about audience interaction. But I'm ambivalent about most of what passes for audience interaction in rock, since it consists mostly of clichés: "How are you doing, Beijing?" "Everybody clap your hands on this one." "Sing along if you know the words." Striking dramatic poses for the crowd. Been there, done that, thousands of times. A band that just does their thing and gets into the music is much preferable to all that old hat. Their lack of posing also intensifies the feeling that for this band, music is not just entertainment, but a very important matter. 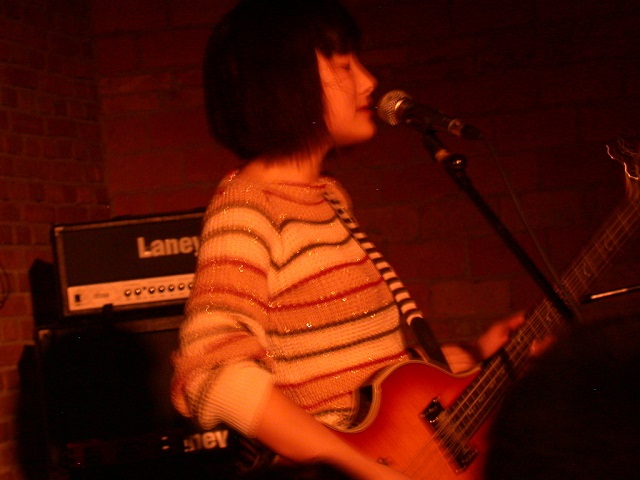 2 Kolegas is a great place to see a show, not such a great place to take pictures since the lighting is pretty minimal. You can read my original post about the show here, including more photos and descriptions of the other bands. After this night, 2 Kolegas became one of my go-to places for music, including a two-day folk festival with an outdoor stage and barbeque. Drinks were ridiculously cheap there, and the poor ventilation was the only drawback — sometimes I just had to step outside, given the prevalence of smoking in China. In the wintertime, as on this night, it got very hot and stuffy inside, but the cozy vibe and great music made up for any discomfort. And luckily it wasn't too far from where I lived, so I could walk to it in about a half hour if I didn't feel like taking a taxi. 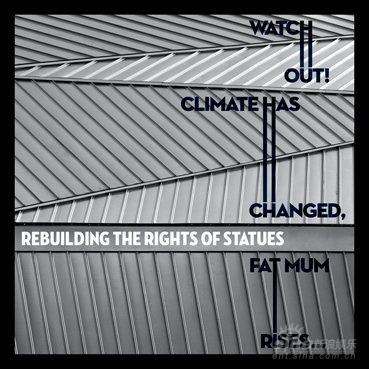 After that night, I didn’t get a chance to see them again until June of 2009, at the release party for their full-length CD with the unwieldy title of Watch Out! Climate Has Changed, Fat Mum Rises... (including punctuation), which is out on Modern Sky in China. So far no outside release that I'm aware of (though it seems to be available from their website). No Brian Eno on this one, but his presence is not missed. The music is more sophisticated all around, with greater variety in moods and tempos.

When it was new, I wrote a review of the album.

Here's a video from a live show in Shanghai, most likely a few months later.

The show I saw was at Yugong Yishan, which is much bigger, with better lights and sound than 2 Kolegas, though lacking the cozy dive ambiance. It's in an old building that looks like a Qing Dynasty government office from the outside, but inside is all modern convenience, with an odd multi-level layout that would be quite challenging to someone who can't handle stairs. But the drinks are still reasonably priced, and I had many great nights there. As an added bonus, it was even closer to my apartment than 2 Kolegas, and sits practically on top of a subway station, though the subway doesn't run late enough to get home after a show, so I usually rode my bicycle. 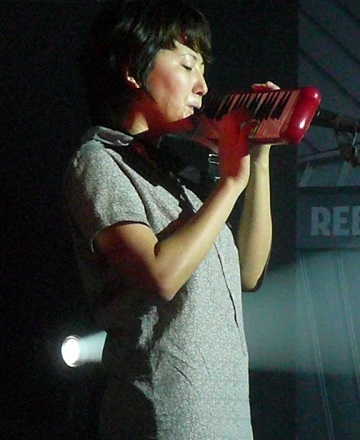 This band was great before, but have since grown into something truly awesome. The new material is rather atmospheric on the CD, though the live show was every bit as intense as before. Some of the extra instrumentation that was used in the studio was foregone, some was included by way of pre-recorded parts.

As you can see in the picture at the top of this page, they've maintained the setup facing each other, and with the much larger stage, there was room for keyboards and extra drums. Even with all the lights and the professional setup, there was an intimacy to their performance — they're the same band, just getting better at what they do.

Liu Min's bass playing has gotten more assertive, though she still remains rather still on stage. She even handles lead vocals and melodica at times, while low notes came from some mysterious unseen place. 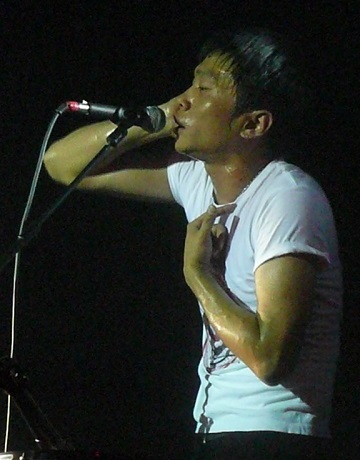 Hua Dong sometimes sets aside his guitar to concentrate on singing. When he does this, there are often taped guitar parts filling in. These “non-live” elements are mostly unobtrusive and do not detract at all from the impact of the show. He also emphasized some of the rhythms by playing a tom-tom set up next to him.

I have also written about this show here, including more photos and some about Offset: Spectacles, who opened up.

In short, this band is one of the best bands in China, well able to hold their own with any band anywhere, both live and in the studio. After the political themes on their debut EP, the lyrics have mostly visited other topics, or gotten oblique enough to confound both sympathetic listeners and government censors. The booklet for Watch Out lists all the words used in the lyrics... in alphabetical order, not the order they're sung.

As of late 2013, they haven't released another album, though there is some new material, and they've been playing live.

Here's a video from their appearance at 2012's Strawberry Festival, doing a tune not on either CD.

I don't know if this signals a move in an electronic direction or is an oddity in their setlist — I guess we'll find out when the next album comes out. And I'd like to point out that the hyperactive camera work in the video is typical of Chinese music festivals. They all have elaborate video recording setups, with many cameras everywhere, including on stage, getting in musicians' ways. They produce DVD compilations of performances, all of which are put together like this one.