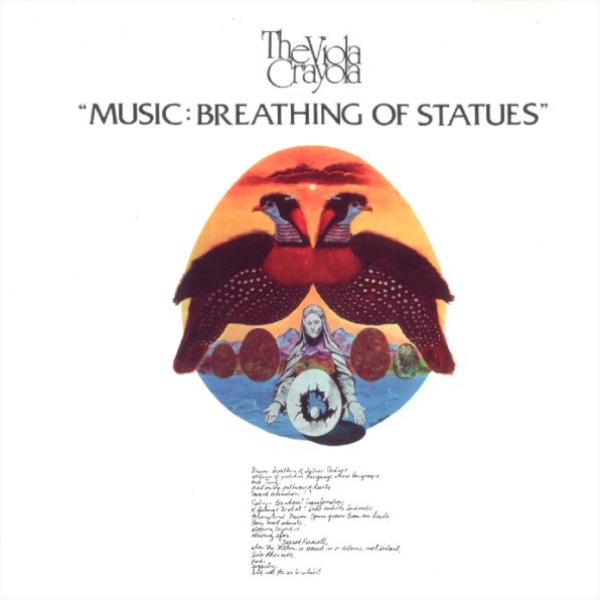 OK, so Music: Breathing of Statues is an artsy, pretentious title, and more than a little odd. One of the odd things about it is that the music on the album is not really pretentious at all, unless you’re completely prejudiced against musicians who really know their way around their instruments. There is a hint of the kind of complexity associated with Berklee grads, but there’s enough improvisation to avoid sounding like over-rehearsed wankery. This is a fusionesque guitar trio and the Viola in the band’s name belongs to two of the members, Tony and Ron Viola (guitar and drums respectively). Bill Jolly handles the bass. Tony Viola’s guitar is the dominant factor, and he’s got a very interesting style, at times reminding me of Jimi Hendrix, Larry Coryell, early John McLaughlin, and even Frank Zappa, Fred Frith, or Henry Kaiser. When he breaks out the wah-wah, the Hendrix connection pops up, especially as he every once in a while drops in a heavy rock riff to punctuate the general jazzy feel. And not to neglect the others, the drums combine rock and jazz seamlessly, and the bass handles both solid bottom and tasty flourishes. Apparently Tony died shortly after the album was released, which is the only reasonable explanation for his status as an unknown. That and the fact that this remarkable record was released on a tiny independent label that wasn’t able to bring it to the attention of anyone who could have done something with it.