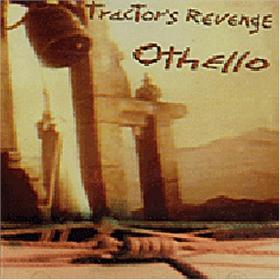 Tractor’s Revenge is a four piece act which embraces the darker side of gothic progressive rock much in the vein of Belgium’s Universe Zero. Led by Avi Bellili, the twelve pieces on this recording serve as a grim adaptation of writer William Shakespeare’s classic tragedy that jointly explore the themes of racism and murder. Guitarist Roger Trigaux even cameos on three pieces giving the unmistakable stamp of paranoia and angst for which he is well known. At times the band’s delivery is more akin to Devil Doll, who at times were a bit extreme in their use of horrific subject matter. “Handkerchief” has a particularly dire tone to it, placing the song squarely into comparisons with Present’s Certitudes. All vocals are in Hebrew, which gives additional credence to often brutal and exotic arrangements as heard on “Tis of Aspic Tongues.” “Willow Song,” in contrast, opens with a ghostly dirge that transcends into a mournful ballad partly sung by female vocalist Maya Moaz. A creepy “Epilog” closes out the disc on unsettled footing which fits in nicely to all the prepared gloom and disaster. Udi Koomran’s first major experience at the sound mixer is a total success as the delicate intricacies of the song’s disturbing textures are well captured. Overall this disc should appeal to most fans of the ReR catalogue that embrace doom laden songs within a bleak musical structure.