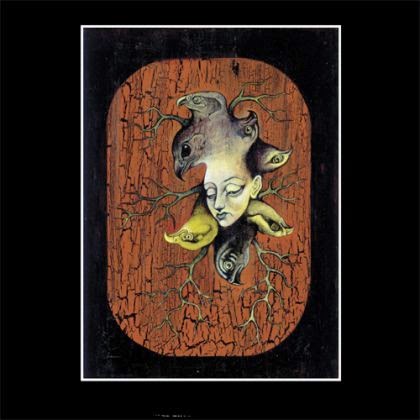 In 2008 The Long Dead Sevens, Paul J. Rogers et. al., released The White Waltz and Other Stories. Since then I have been waiting for their next release. While not exactly a follow on by the same band, The Sevens Collective’s A Too Much Divided Heart continues in the same direction. Paul J. Rogers, Jennifer Hames, and Ian Turner (who performed on The White Waltz and Other Stories) are joined on various tracks on this new release by Michel Leroy (Un Festin Sagital), Soriah, Randall Frazier (Orbit Service), Philippe Petit, Simon T. Legg, Jack McCarthy, and Matthew Webster. The eight tracks are a mixture of instrumentals and songs with vocals that glide between spoken word and doleful singing. There is an overall Gothic western ambiance to the music, though some tracks are more experimental. Since the band members are geographically dispersed (England, France, Chile, and the US), the music was sent back and forth several times as part of the compositional process. The opening song, “Extraordinary Witch,” contains some beautiful Spanish guitar, violin, piano, and Spanish lyrics that further their journey into Gothic western territory. The next song, “The Rose Room,” continues the sad ambiance with tinkling wind chimes, violin, and acoustic guitar. Then the mood shifts with the excellent eerie instrumental “And Slowly Fell My Ocean Drone,” that evokes whale song via the glissando violin phrases that accompany the drones and Tuvan throat singing. The fourth song, “El Adios del Sol,” is another dark yet beautiful song that has a pseudo-cabaret atmosphere, almost steam punk. The next track, “The Levy Flight,” is another instrumental with pulsating and relaxing electronics and violin that reminds me of Tony Conrad. Next is “These Heavy Waves,” that begins with you cruising through deep space and morphs into a Legendary Pink Dots chord progression with Edward Ka-Spel inspired lyrics. Track 7 “The Berlin Tapes :: The Island Apes” is an experimental piece with reversed tapes and other sounds. And the disc closes with a final song “Don’t Dig So Deep.” This release is a delight and I hope that it does not take another six years before their next release.

Frigg - Oasis (Keidas) – This seven-piece group takes Scandinavian folk music in a slightly different direction than some of their label-mates, adding a hefty dose of American traditional music, notably bluegrass. But they do...  (2006) » Read more