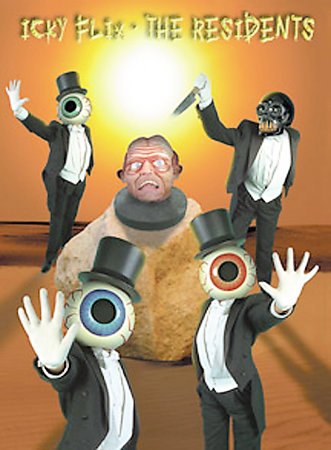 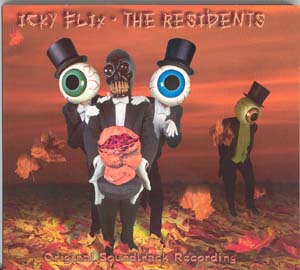 Since the mid 70s, the Residents have put out a succession of bizarre albums featuring their own take on popular culture and music. In addition to those musical releases, the band has from the beginning produced visual counterparts to their unusual sounds. The earliest dates from 1976, when the band set “The Third Reich ‘n’ Roll” (musically a deconstruction of “Land of 1000 Dances” and “Money (That’s What I Want)” with rickety pounding tom-toms and distorted vocals) to a black-and-white film featuring newspaper-clad musicians attacked by an aluminum-foil covered machine-gunner, and some dancing T-bone steaks crushing swastikas. And there’s the legendary “Vileness Fats,” a long-form film of epic surreality (concerning a land of one-armed midgets and conjoined twins named Arf and Omega) which the Residents worked on for years and never finished (presented here in an edited reconstruction). There are some live performances combined with visuals, and some excerpts from previous CD-ROMs Bad Day on the Midway and Freak Show. A highlight is “The Gingerbread Man” which tells a variety of short stories with computer graphics. As an added bonus, for each of the pieces you can choose to listen to the original music or new versions done in 2000 with 5.1 surround sound. The CD soundtrack presents those new versions mixed in stereo, comprising a sort of re-recorded Residents’ greatest hits. It’s hard to really express how strange these little films are, and they range from primitive ineptness to slick (but still odd) computer graphics. Chances are, if you like the Residents at all, you will enjoy this, though you might not be able to find anyone else willing to watch it with you.