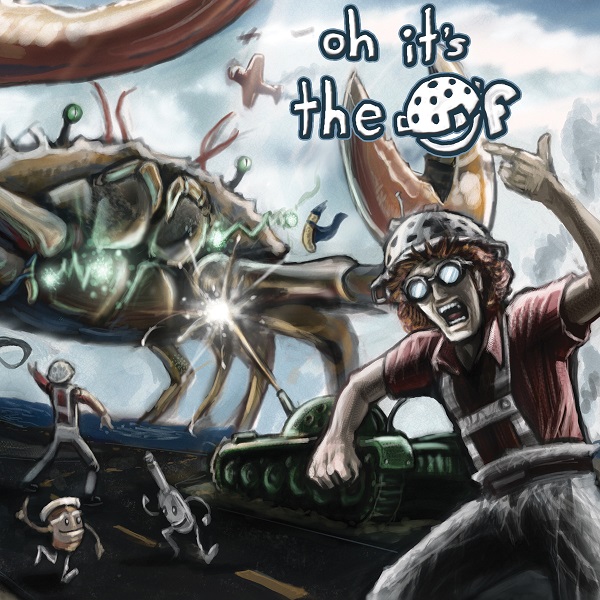 What to make of this one? A band with the awkward name The Of, a CD cover with a cartoonish illustration that harkens to cheesy monster movies, and a band photo featuring aluminum colanders on musicians' heads... The album starts out with some information about a hermit crab battling a seagull over a french fry, and then suddenly we're off into an orgy of guitar soloing. More than half of this CD sounds like Shut up 'n Play Yer Guitar, with extended riffing and blazing guitar work. And this isn't your standard shred-o-matic Vai-wannabe guitar soloing, it's more your old-school Zappa-and-a-couple-pedals variety. The other part of the CD involves somewhat silly songs and messing around behind goofy narration. It's pretty obvious how The Of would answer the timeless question "Does humor belong in music?" I'll admit there are times when I find myself heading for the Next Track button — hearing the narration bits is something I only need to do once — but the extended instrumental parts are worthy of revisiting. "Mouse Trash Recipe" is fourteen minutes of inventive fun with added horns, and the two parts of "Sodo Monkey" feature so much gratuitous six-string wankery that I have to smile. So if you're longing for the glory days of The Grand Wazoo, here's something to brighten your day. And for what it's worth, the humor here is of the nerdy absurdist kind, not the scatological kind. This band manages the trick of making precise complexity sound off-the-cuff. An unexpected gem of New Weird Northwest.

Related artist(s): The Of

Björk - Medúlla – For a supposed “pop” artist, Icelandic singer Björk has shown a stubborn disregard for the conventions of pop music. From the beginnings of her career as a techno diva, she has steadily pursued...  (2005) » Read more