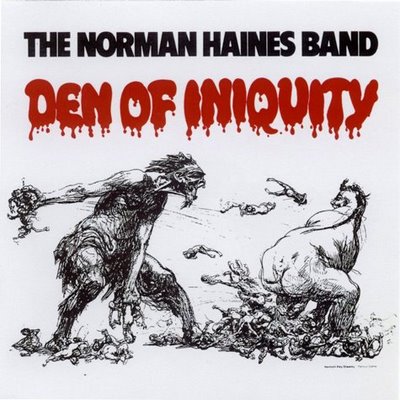 Norman Haines was the keyboardist and main songwriter in the band Locomotive on their only release We Are Everything You See, from around 1970. As things sometimes go, it wasn’t working out for Haines and he left the band before their album was released, took a little time off to rethink and plot a new direction, and then started assembling his new band. Meanwhile his former bandmates recruited new members and went on to become The Dog That Bit People, another story for another day. Here, Haines and band dwell mostly in a gritty organ-driven proto-progressive rock sound, with jazz, folk and blues influences. Vocals are shared by Haines (also the chief composer), guitarist Neil Clarke, and bassist Andy Hughes; the band is rounded out by drummer Jimmy Skidmore, who along with Hughes, propels the bottom end with verve. The album really has three phases; the original first side has five song-length compositions, the first four being catchy rock tunes kicked off by the powerful title track, followed by the Hughes co-composed "Finding My Way Home" which was the a-side of one of the band’s singles. A reworked and retitled version of Locomotive's "Mr. Armageddon" –now "Everything You See" follows, much improved over the original. The bluesy hard driving "When I Come Down" is next, before the side closes with the tasty acoustic Hughes composition "Bourgeois." The second side of the original LP features two extended pieces, kicked off by the four-part thirteen-minute Clarke composition "Rabbits," which evolves into a ripping jam that is without a doubt the album's high point. Closing the side is the eight-minute introspective keyboard instrumental "Life Is So Unkind." What follows on the CD are a gaggle of bonus tracks which include a single version of "Rabbits," the a- and b-sides of a non-LP single "Daffodil" / "Autumn Mobile," and another single recorded by Haines with different musicians after the band split, which was almost as soon as Den of Iniquity was released. Overall, this is an essential slice of British rock history.