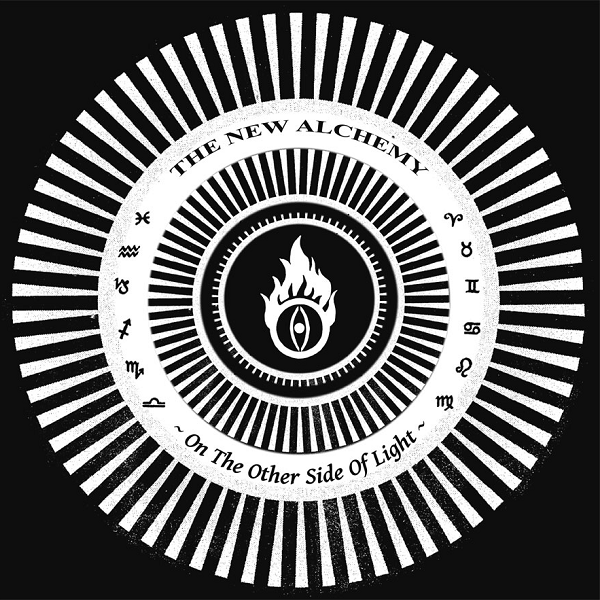 On the Other Side of Light is the limited edition LP (also available in CD form) by Swedish band The New Alchemy (Per Svensson and Ebbot Lundberg). Both Per and Ebbot started their careers as artists in the 80s. Per released sound art and poetry and Ebbot was the lead singer for the band Union Carbide Productions. Over the intervening years both artists continued honing their skills and they finally decided it was time to form The New Alchemy with Mats Gustafsson (from Sonic Youth and other bands) and Patrik Caganis (also from Union Carbide Productions). The band’s goal was to create a new mix of psychedelia. The result, On the Other Side of Light, is a bit hard to describe, but something akin to a kinder and gentler Acid Mothers Temple. The A side contains four tracks in the four- to six-minute range and the B side is one long 24-minute track. The disc opens with “Solar Eclipse,” a hard industrial noise number with sound bites, reversed cymbals, squeaks, and wails. There is no melodic structure to this track, just amorphous noise that after fourminutes you finally realize is a saxophone. An odd choice to open the disc as it could turn people away from listening to the remaining tracks that are quite enjoyable in contrast. The second song, “Creatures,” has a definite 60s West Coast garage-psych vibe with some vague hints of Jefferson Airplane. The third song is the excellent title track with its post-Dark Side Pink Floyd elements blended in with an overall garage-psych aura. The side closes with “Silver Chain,” another excellent song that starts with a tolling church bell and then moves into dark Gothic western territory with chanted vocals and trippy electric guitar referencing The Doors’ “The End.” “Extra Terrestrial Blues” on the B side is another slow moving, trippy garage-psych tune that is like Acid Mothers on downers mixed with a bit of HP Lovecraft and early Pink Floyd. To sum it all up, The New Alchemy were successful in creating a new psychedelia and I expect to hear more from them in the future.