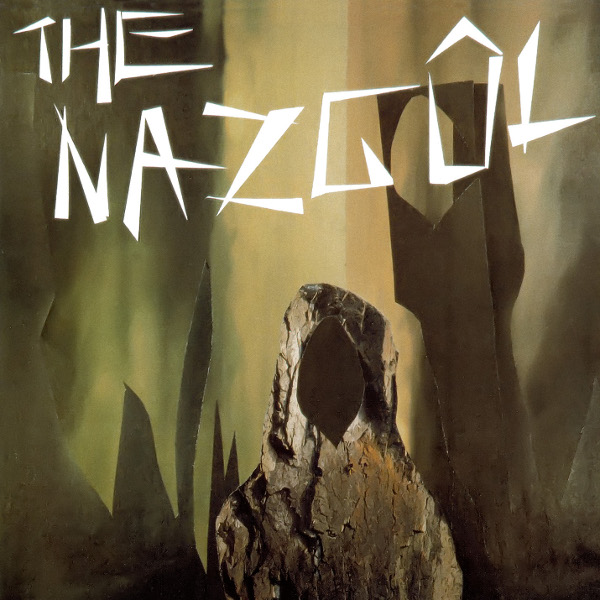 Unless you have been living under a rock for the last 50 years, you are probably aware that the Nazgûl are the Dark Riders from J. R. R. Tolkien’s Lord of the Rings trilogy. Some time in the mid-70s Toby Robinson brought together a group called The Nazgûl in the studio for his Pyramid label. The Nazgûl tried to emulate the dark, sinister ambiance of Tolkien’s Mordor. They were the most free-formed of Germany’s improvised rock bands, even darker than the nethermost regions of Tangerine Dream at its weirdest, as well as being the most experimental band to record for Pyramid. Toby, credited as Gandalf on the album, handled percussion, Moog, organ, electric piano, and bass. The other two enigmatic members were Frodo on drums and percussion, and Pippin on percussion, guitar, and trumpet. According to Toby, The Nazgûl was the most prolific of the Pyramid acts, spending long hours during the graveyard shift in Dieter Dirk’s studio twiddling knobs, tapes reeling from one machine to another, creating new ways of achieving feedback, processing sound sources, etc. The result was four abstract and experimental soundscapes in the range of 9 to 13 minutes. The album opens with “The Tower of Barad-Dûr,” which for those of you unfamiliar with the tale is the tallest tower in Mordor that overlooks Mt. Doom. This piece starts quietly and builds to a throbbing bass synth note along with processed scraping sounds and banging that culminates in a crescendo of harsh sonics. Only to be followed by a guitar line reminiscent of the abstract interlude from Pink Floyd’s “Interstellar Overdrive,” which then turns more sinister and nerve-wracking as other sound sources enter, and then augmented by organ, imbuing the piece with a sepulchral ambiance and eerie chords that slowly fade to end this track. Obviously the band is trying to convey a sense of the doom and trepidation Frodo and Sam felt as they neared the end of their mission. The second track is “Shelob’s Lair,” complete with cavernous thuds, pattering, and hissing as Frodo and Sam creep through the tunnel. As they enter the ambush orchestrated by Gollum, the sounds grow in volume as Shelob stalks her prey. Throbbing, pulsating, rhythmic bass and other heavily processed sounds layered over sustained chords, bursts of noise, and scraping sounds complete the scene of Shelob’s bite and subsequent scuttling back to her lair. The third track is “The Dead Marshes,” with metallic percussive banging and reverbed ringing communicating the battle between good and evil that took place here long before the Lord of the Rings storyline. The now haunted marshes speak through the moaning, groaning heavily processed trumpet, processed voices, and a tolling bell as Frodo, Sam, and Gollum make their way through this dark realm. The album closes with "Mount Doom" with washes of processed white noise like escaping steam or demonic breathing. Then as Frodo and Sam enter the mountain we hear far-off mechanical noises that grow deafening and overwhelm the listener as the intrepid Hobbits approach the boiling magma to destroy the one ring. Overall, The Nazgûl is difficult music to take, but you can tell that these three musicians had fun in the studio. The Nazgûl is a major experimental avant-garde work and is now available to a wider audience as a legitimate release to replace the bootleged copies that have been circulating for years.