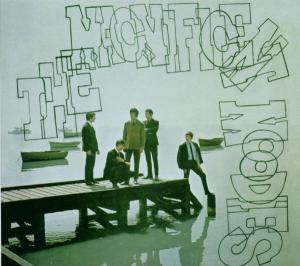 In December '64 The Moody Blues first hit the U.K. charts with a cover of U.S. soul singer Bessie Banks' "Go Now," with its expansive harmonies sounding a bit like a British take on the Righteous Brothers' sound — the single scraped the bottom of the U.S. top 10 in January '65. With a certified hit behind them, the band continued releasing singles using the same basic formula (covers of U.S. R&B hits) but were unable to reproduce their earlier success. By late-summer '65 the LP at hand was released in its mono version, 12 songs, selling modestly in the U.K. In the states, an LP titled Go Now was released, with a slightly different track listing. Both LPs featured a handful of tracks co-written by keyboardist Mike Pinder and guitarist/singer Denny Laine, a songwriting team that would become more important as they moved beyond covers and concentrated on original material; this is where things begin to get interesting, as the Pinder/Laine material recorded in the post-LP era (all included here among the 14 bonus tracks) is far more sophisticated and engaging than most anything on the LP. The band continued to record new songs up through August '66, when Laine and bassist Clint Warwick decided to abandon ship; Decca kept releasing this material as singles right up through early '67, even after Justin Hayward and John Lodge had joined up. This is good stuff, but don’t expect Seventh Sojourn... this is clearly the music of an earlier era.