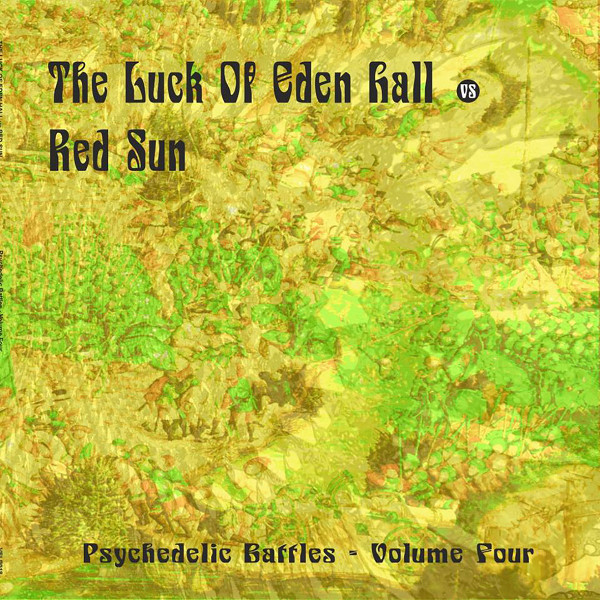 Italian vinyl label Vincebus Eruptum is releasing a series of split LPs called Psychedelic Battles with one band per side. The first volume featured Sendelica and Da Captain Trips, the second volume The Spacelords and Dhvani, and the third The Linus Pauling Quartet and Colt.38. Which brings us to the present Volume Four featuring Chicago’s The Luck of Eden Hall and the Italian band Red Sun, which is new to me. The Luck of Eden Hall has a long musical history, with the bulk of their recorded output in the three to four minute range. The one exception was their 18:54 cover of “Starship Trooper” on FdM’s 2015 double LP Side Effects. On this split LP may be The Luck of Eden Hall’s magnum opus, the nearly 23 minute “Make Way for the Mighty Machines.” This side-long psychedelic tour de force covers a lot of territory powered by fuzzed guitars, Mellotron, and lysergic trippiness to prepare the way for the mighty machines. Seven minutes into the track the music shifts to a quiet interlude for a few minutes that sounds remarkably like “Sensation” from The Who’s Tommy. And Curvey’s voice even sounds like Pete Townsend. There are some lovely Mellotron passages and the track builds to a trippy climax and slowly fades away. An impressive first round in the battle.

Side two features three different instrumental tracks by Red Sun: “Meteor Shower,” “The Lost Planet,” and “The Space Runners.” Red Sun’s music is very different from The Luck of Eden Hall and an interesting juxtaposition. Red Sun shows more of a Krautrock influence as well as elements from 90s British psych bands like Mandragora, Dead Flowers, and the Alman Mulo Band. While The Luck of Eden Hall plays trippy music, Red Sun’s is edgy energetic jams with swirling electronics. There are also some tribal elements noticeable on “The Space Runners.” Red Sun is ready to do battle. But who won? Difficult to say. Red Sun definitely displays more testosterone, but these two bands are not similar enough to declare a winner. So it is a draw for me. At any rate, Psychedelic Battles - Volume Four is an excellent album. If you cannot find one of the limited edition LPs, you can always download the music, but you have to go to two separate Bandcamp pages.