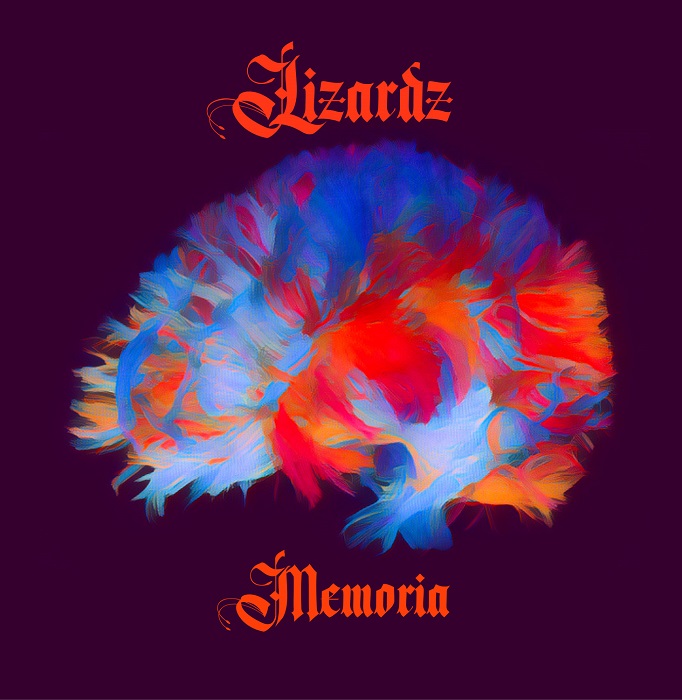 The Lizardz is a Wisconsin-based rock band that’s been a going concern since the late 80s, first forming as a blues cover band, then graduating to covers of The Stones, Pink Floyd, The Doors, The Dead, The Who, and other bands from the classic rock era. I mention this history because this still informs the original music that the Lizardz play all these years later. Years ago the band had a dedicated lead singer and harmonica player, but he left sometime back, leaving the band as a five-piece, with the remaining members picking up the vocal duties. The band has released three albums since 2013, the core members today being bassist Jamie Bruhn, drummer Travis Plantico, guitarist Milo Plante, and keyboardist Mark Larson, and the songs on Memoria were all written collaboratively. The band’s lead guitarist went on hiatus a couple years back, so filling that spot as a guest player is none other than Jerry King (Cloud Over Jupiter, Moon Men, Moon X) which in fact is how the Lizardz came to our attention here at Exposé. The set starts with “Campfire Resurrection,” a fun and festive zydeco styled piece with band members alternating vocals from one verse to the next throughout, and all joining in for the chorus; it’s reminiscent of something the Nitty Gritty Dirt Band might have attempted back in their more rocking days. It’s followed by “For a Short Time,” another strong entry featuring thoughtful lyrics and memorable hooks. Other standouts include the slow and pensive “Heaven and Earth,” with a thoughtfully delivered set of lyrics, possibly about the memory of a lost friend or band member. “Dementia Rain” is another fun track not unlike the opener, informed by the spirit of The Grateful Dead mixed with a little country. “Do You Remember” and “Boat on the Ocean” offer a sample of the band’s classic rock side, punchy hard rockers with all the late-seventies power moves and blistering guitar solos. “This Is Goodbye” ends the set on a sad note, another slow number that reminisces about love or friendship lost forever and the pain that follows. Memoria shows a band with many sides across its near-seventy minute duration, and they really shine on the fun, country and zydeco-informed numbers as well as the slower ballads like the closer and “Heaven and Earth,” but on their harder rocking numbers they’re just mostly sort-of okay, not offering anything really groundbreaking, though your mileage may vary.