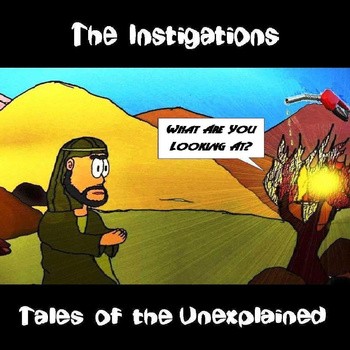 This is what happens when an artist has way too many diverse influences and no producer around to say “do this, no you can’t do that” and keep said artist on a single path of some semblance of commercial viability. That’s not necessarily a bad thing, though, and in fact here it works very well for eclectic listeners like myself who can appreciate a little bit of everything all juxtaposed. And for the artist it works as sort of a calling card: here is the full range of what I can do, take it or leave it. The Instigations, for the most part is the solo project of multi-instrumentalist Owen Green, from Sherman Oaks, California. He wrote and played all the pieces, and produced it, but brought in other musicians to help round out some of the arrangements, primarily drums and additional percussion where needed, additional piano, organ, lead guitar and vocals. While the album is mainly an instrumental workout, one of the standout numbers is the world-influenced piece “Who You Are – So Far” featuring harmonizing female vocals singing in Hebrew, in a sort-of dark shoegazer-like atmosphere. “Theme of The Unexplained” is a somewhat introspective piece in a solid progressive rock vein featuring numerous sections over its three minute duration. “Emanations” features a strong world-jazz undercurrent with complex rhythms, not unlike Embryo, over which some playful melodic figures carry the moment. “The Thirteen Steel Horned Goats of Akbar” pits some unusual clanking percussion against some mysterious melodies played mostly on keyboards, again with a bit of middle eastern influence. Speaking of which, even more evident on the short two-minute vignette “Ibn X” where oud and hand percussion provide a solid rhythm undercurrent for a wandering synth melody. “Smart Monkey” plots a jazzy theme against an experimental backdrop of percussion and voice samples of the Indonesian ‘Kecak’ monkey dance, but twisted into knots, approached forward and backward and now in a barely recognizable form; the result is indeed very cool. The nine-minute closer “Presence of Mind” is the album’s longest cut, a multi-sectional introspective adventure of strangely wandering meter changes stewing in a nest of percussion, synths, guitar, bass and oud. All taken, there are a lot of unusual ideas presented across these fourteen tracks, manna from heaven for the adventurous listener.