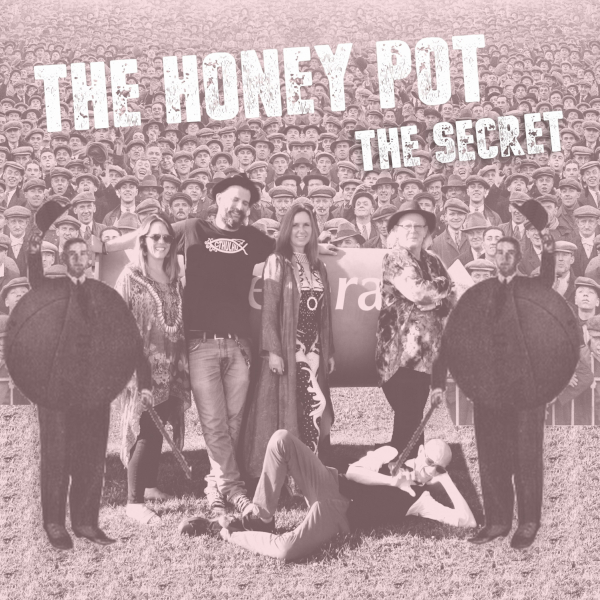 The secret is out! The Honey Pot is perhaps the best neo-psych band on the planet. Icarus Peel and bandmates have released a gorgeously affectionate album wrapped in glorious sunflakes of 60s / 70s psych that bathes your ears in a kaleidoscopic trip of lysergic blossoms and faerie glitter. I have been holding off listening to The Secret until I could devote the time and I am glad that I delayed gratification! The Secret is The Honey Pot’s fifth long player album and finds them producing a mature sound with lush melodies, rich harmonies propelled by Crystal Jacqueline’s beautiful voice, fuller orchestrations, and trippy lyrics. Long enamored with US West Coast psych, The Honey Pot have extended that love to successfully create an exquisite amalgam of US and European 60s / 70s psych. The excellent “Waterfalls” is not the TLC song, but instead a fantastic Crystal and Icarus duet singing “How can it last, you in the future and me in the past?” evoking Joan Baez, Gene Clark, and the Jefferson Starship’s Blows Against the Empire. I was intrigued by the song title “Walk a While” wondering if The Honey Pot was covering Fairport Convention, which could have been wonderful.  But instead they explored 60s folk rock with another journey into Joan Baez territory and possibly Peter, Paul, and Mary. For me, the best track is “Django’s Tune,” eight minutes of a beautiful bucolic mixture of Jerry Garcia-inspired guitar chops, Hawkwind’s debut album, and Krautrock. Pulsating bass, Mellotron, and rock-solid psych from guitar wizard Icarus Peel provide an outstanding listening experience. And the album closes with a “Reprise” of the opening title track that is a superb climax to The Secret. If you are new to The Honey Pot, The Secret is a great introduction to the band. And if you are a long time fan, you will definitely experience a new hour of finely crafted neo-psych.