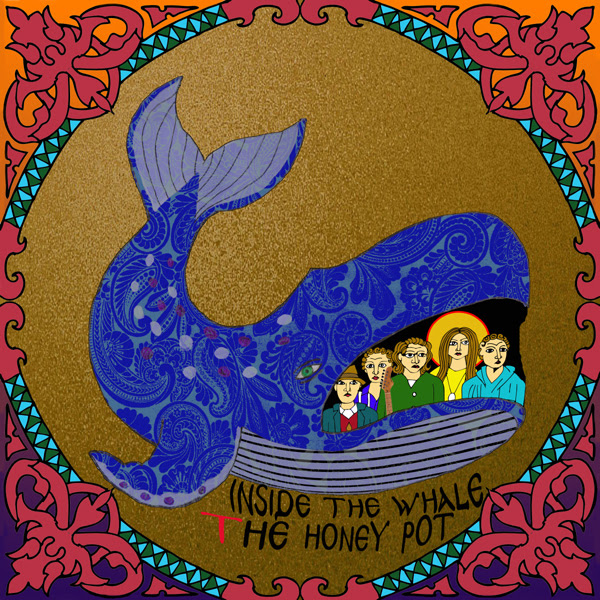 Reviewing music is a blessing. I am exposed to various genres and bands. And every once in a while I am blown away when I hear a brand new release. On February 26, 2016 Mega Dodo unleashes on the world Inside the Whale by England’s The Honey Pot. Forming the band in 2012, The Honey Pot’s Crystal Jacqueline and Icarus Peel have garnered a fan base via Fruits de Mer since 2013. It was also around this time that The Honey Pot felt they needed a vision, a guiding light, to lead them on their jingle jangle journey. So the band looked back in time to the US West Coast and the Summer of Love for motivation. Using The Byrds and The Doors as inspiration, The Honey Pot have managed to distill the essence of 60s psych and extend it forward into the unwritten future. Inside the Whale is available as both a 180 gram LP and a CD. The CD contains two bonus tracks. In addition, Mega Dodo is also issuing a very limited edition (150 copies) 3CD set of Inside the Whale, Live in London, and Lisa Dreams with more bonus tracks, plus interviews with Icarus Peel and Crystal Jacqueline. Inside the Whale opens with “The Outskirts of Your Mind,” the title immediately recalling “The Windmills of Your Mind” from The Thomas Crown Affair, but that is as far as the comparison goes. “The Outskirts of Your Mind” is a rocking late 60s psych song with organ, Crystal Jacqueline’s vocals, and a fantastic trippy instrumental break with a jangling guitar lead reminiscent of Roger McGuinn. The title track is superb! It begins with pseudo whale song that segues into a fusion of HP Lovecraft, The Doors’ “The End,” and Grateful Dead’s “Dark Star.” This is the longest song on the disc and at eight minutes, I am surprised to hear myself say this, the song is too short! This dreamy vision lends itself to extended jams and would be an extraordinary experience in concert. The third song is “Starfish Smiles,” with pseudo surf and wind sounds with phase shifting like Bowie’s “V-2 Schneider.” Track four, “Almost Exactly Beautiful,” closes Side 1 and is the first song without Crystal’s lead vocals. This psychedelic love song with beautiful vocal harmonies is charting new sonic territory. Side 2 kicks off with “Psychedelic Circles,” where The Honey Pot have taken elements from the Silver Apples’ “Oscillations” and integrated them into a lysergic jam. Next is “Pink and Orange,” another outstanding drum and keyboard dominated song. There are groovy organ and guitar solos that could be easily extended into a “Light My Fire” or “In-A-Gadda-Da-Vida” opus. Next is “Walking on Eggshells,” that opens with an exquisite harpsichord solo. This eerie gothic psych song could almost be part of a 60s vampire movie soundtrack. “Butterfly Ride” is a haunting acid tinged song with elements of Judy Dyble’s recent “Crow Baby.” Side 2 closes with “A Curates Egg” with acoustic guitar, a catchy melody, and gorgeous vocal harmonies. The two CD bonus songs are “Poppy Surfing” and “Three Sisters.” “Poppy Surfing” is an R&B/psych hybrid that made me think of Dire Straits’ “Sultans of Swing.” And the closer “Three Sisters” is another gothic-psych tune with dissonant organ chords, echo guitar, and a trippy jam break mid song. Inside the Whale in either format, fires on all cylinders. So, swallow one of their psychedelic circles and take a trip with The Honey Pot, you won’t be disappointed!