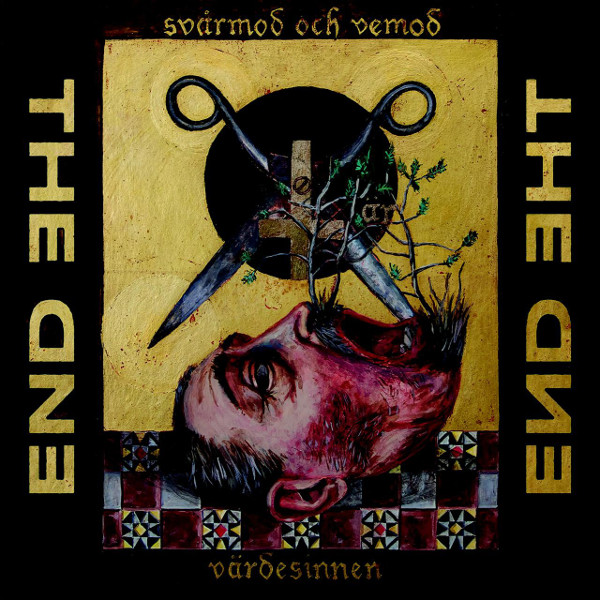 One of the qualities I enjoy most in music is surprise. While there is a potential comfort in music that does what you expect it to, I value the disorientation that comes when creative artists let their freak flags fly, so to speak, and throw out whatever comes to mind without regard for convention. The End is a group that features musicians doing exactly that. This international collaboration features Mats Gustafson and Kjetil Møster on saxophones and electronics, both of whom we’ve encountered before in avant-jazz settings. Anders Hana (baritone guitar) is a former member of Jaga Jazzist — so again, a jazz guy, though of a fairly different stripe than the more experimental projects of the two woodwind players. Vocalist Sofia Jernberg is new to me, though her bio lists a variety of work in both jazz and modern classical music, leaning towards the experimental side. On drums we find Greg Saunier, an American known for his work in the band Deerhoof, which tends towards noisy improvisational rock rather than jazz. This makes for an interesting and unpredictable blend of sounds. Gustafson and Møster don’t often play saxes at the same time, so this isn’t as woodwind-heavy as you might expect — there are a lot of unidentifiable sounds I’m putting down to the credited “electronics.” There are moments of squalling feedback and craziness that don’t seem to be guitar-based, but also times when a natural sounding sax comes to the fore. Jernberg mostly sings in normal tonal ways (with a beautiful tone, I might add), but also ventures into ululating cries, growls, whispering, and other non-standard ways of using her voice, sometimes wordlessly, but often in English. Hana occupies the lower register, though without fulfilling what would be considered a normal “bass” role. Saunier provides timekeeping at times, but this is far from ordinary rock drumming. In some ways, the approach is more akin to some of the more boundary-pushing jazz players than anything you’d hear anywhere else. The six tracks range from under a minute to nearly 15, and feature both composed and improvised parts. All in all, it’s a fascinating glimpse into the minds of five unfettered talents, and a true adventure in listening.