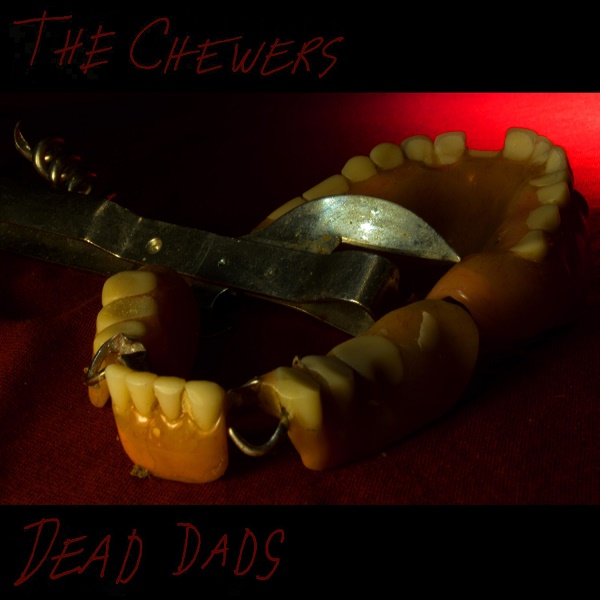 If you’re familiar with The Residents, I could probably say The Chewers are along the same lines, and you’ll know both what to expect and whether you’re likely to enjoy their music. In point of fact, many of the 20 short tracks on Dead Dads most resemble a hypothetical collaboration between The Residents and Captain Beefheart, with Residents vocals and Beefheart’s band providing much of the backing. There are off-kilter blues riffs from two or more guitars and unusual patterns on the drums. The vocals are generally not really sung, more like the kind of rhythmic declamation The Residents use that doesn’t sound at all like rap. There are often weird echoes and other effects on the voices. In addition, the stories told in the lyrics are surreal and touch on creepy, icky subjects like cockroaches, lizards, pedophiles, and spasms. Other instruments make occasional appearances, like piano, trumpet, and something bowed – either upright bass or cello – all played by Travis Caffrey and Michael Sadler as far as I can tell. It’s all presented with a dark sense of humor, and comes off as more accessible than a lot of avant-garde music. As long as you’re not put off by the unconventional arrangements, Dead Dads is actually kind of fun to listen to. The songs groove in a minimalist kind of way, and you never know what might come next, aside from the fact that it will be weird. Clichés are avoided in The Chewers’ music, but I’ll finish with an Exposé cliché: recommended for adventurous listeners.

David Cross - Testing to Destruction – This album is the answer to the question, "Whatever happened to that guy who used to play violin in King Crimson?" Don't get your hopes up, though, Larks' Tongues it ain't. I really hated this album...  (1995) » Read more