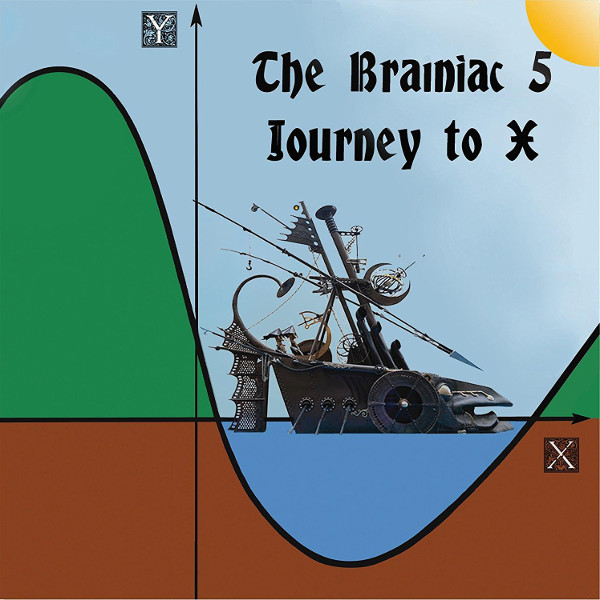 Looking back on the history of The Brainiac 5, there is a clear progression, from psych / space inflected punkish pub rock to more professional-sounding and sophisticated material — though without losing that punk spirit, and never sounding stuffy. Journey to X continues that trend, with two tracks topping the ten-minute mark and involving various sections worked together. “The Human Scapegoat” is the best example. It starts as a jangly neo-psych tune, then takes a left turn into a warped march rhythm with a freaked-out guitar solo. This eventually works its way into a heavier section, followed by a variation of the first section. The next part starts out with a tinkling kalimba which builds into a space-rock jam with slide guitar. A reprise of the middle section leads into a distorted kalimba coda backed by a rolling triplet beat unlike anything else in the track. It’s just over 12 minutes of interesting changes, and while none of the sections is especially complicated on its own, the result reminds me of 70s bands who took their rock songs and built them into suites. Other tracks on Journey to X go in a lot of different directions. “Some Things” features a screaming harmonica solo; “At Noon” is a psych-flavored song backed with acoustic guitar; “Laura Riding” features a slinky riff, some nice electric piano, a great wah-wah guitar solo, and humorous spoken narration in the middle; “The World Inside” takes a jazzy turn with a female vocalist. “Kill It” is the other lengthy track on the album, and it takes a different path than “The Human Scapegoat,” being one song with an instrumental section in the middle that isn’t completely different from the verses. In the midst of the current crop of neo-psychedelic rock bands, The Brainiac 5 forge their own path, more Hawkwind than Strawberry Alarm Clock, and provide an ever-improving version of their style on every new album.

Ozric Tentacles - Arborescence – The Ozrics are masters of the hypnotic groove, finding that seemingly endless psychedelic guitar and synth riff, a repetitive - nearly trance-like structure, and then exploring all of its...  (1994) » Read more