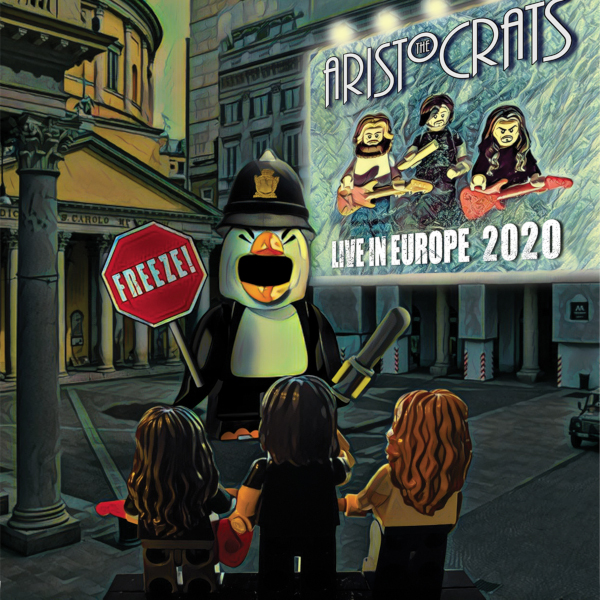 When Covid-19 threw a wrench into the plans of musicians (and everyone else) around the world, The Aristocrats were deep into a European tour, having played nearly a hundred shows since releasing You Know What…? By this time, live renditions of the difficult studio material were starting to please even these perfectionists. But while they were in Spain in February of 2020, things ground to a halt. Luckily, there were live recordings, so here the rest of the world can get a taste of what this band was like on stage. They rip through high-energy versions of five tracks from You Know What…? and an extended take on “Get It Like That” from their first album. The set kicks off in high gear with “D Grade F*ck Movie Jam” with its outstanding wah-wah guitar and killer bass line. This is some of the craziest whammy-bar guitar work you’re likely to hear, balancing supreme technique with exuberant joy and a sense of fun. “Spanish Eddie” is full of precise start-and-stop rhythms, references to Spanish classical and flamenco guitar styles, and flashy finger work, kind of like classic Al DiMeola run through a shredder (pun not intended, but appreciated) and reworked in power trio form. “When We All Come Together” brings the rocking country jam to life, infusing classic bluegrass picking with enough mutant energy to convince you that Martians with eight fingers on each hand grew up on Chet Atkins records. It’s warped and unpredictable and a hell of a lot of fun. The beautiful and melodic “The Ballad of Bonnie and Clyde” is given a lovely treatment, building up to some dramatic slide guitar work. With the last two tracks, they really start stretching out — the previous selections were all close to their studio counterparts in length — with “Get It Like That” nearly hitting 19 minutes. This track is dedicated to the memory of Neil Peart, who died during the course of the Aristocrats tour. Marco Minnemann pays tribute to one of his favorite drummers with a tricky tune that’s been in the group’s repertoire for ten years or so. There’s some very creative use of ring modulator on the guitar — not something you hear a lot. More than seven minutes of the middle of the track are occupied by a very entertaining drum solo that goes through many moods and techniques, and it seems safe to say no one in the audience was bored. The set finishes up with “Last Orders,” cooling things down with an atmospheric jazzy tune — don’t worry that they’ve lost their fire, though, as it builds to some nice climaxes. Freeze! captures a supremely capable band firing on more cylinders than you’d think a trio could have, but maintaining balance and variety so it’s never just virtuosic wankery or shred-for-shreds-sake.