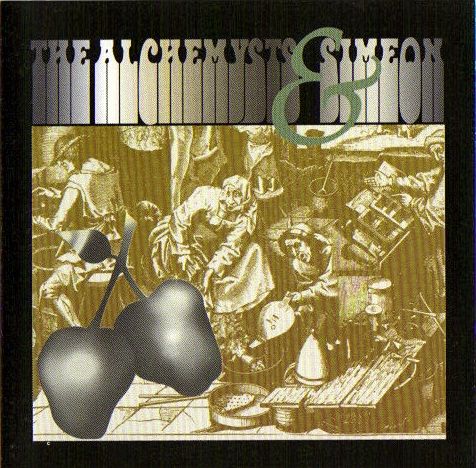 Recorded in September '98, this is probably Simeon's last recording before 'the accident' (see our Silver Apples feature in issue #17). The genesis of the collaboration dates to the 1988 Terrastock festival in San Francisco when The Alchemysts invited Simeon to sit in on their set. This in turn led to a recording session in the UK when the Apples toured later that year, of which this disc is the result. Here the trio of guitar / bass / drums and vocals are joined by Simeon on oscillators, vocals, keyboards and electronics (What? No banjo?) for an intense space-rock workout. In fact most of the basic tracks here follow the early Hawkwind model – heavy repetitive riffing in two or three chords, with electronic sounds applied over the top to good effect. The mix of vocals and spoken taped voices, along with some vibraphone by guitarist Paul Simmons spice up the otherwise fairly predictable basic tracks. It's really Simeon's contributions on electronics, oscillators, and keyboards that make the material here somewhat special, recalling Del Dettmar's input to the early Hawkwind sound. While the early tracks are somewhat unexceptional, things start to get interesting around track 6 "Magellanic," and truly get smoking on the extended jam "Psychotropic over Modulation," where the entire band moves into high gear. The spirited closer, "Morning Comes," is a slower grooving pace with shimmering guitars and echoey voices punctuated with acid drenched leads. Fans of space-rock and neo-psych of the Hawkwind / Ozrics axis would do well to check this one out.