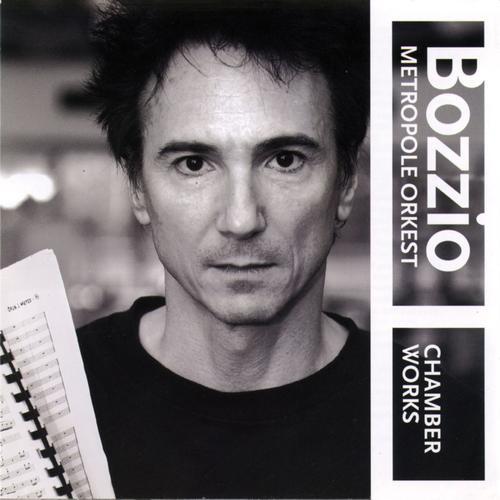 We know him as Zappa’s drummer in the Baby Snakes era, as the man who put the USA into UK, as an essential part of the brilliant 80s video pop combo Missing Persons, and as the man behind the kit on numerous projects of more recent vintage (Polytown, Black Light Syndrome, Explorers Club). This however, presents a completely different side of Bozzio’s persona: the composer of an epic length orchestral work “Five Movements for Drum Set and Orchestra.” Partnered with the Netherlands based Metropole Orkest, along with creative catalyst Co de Kloet, orchestrator Martin Fondse, and conductor Dick Bakker, Bozzio offers a credible slab of ‘serious music’ that works on a number of levels. Influence of the Stravinsky school is in strong evidence throughout the main piece as well as the shorter “Self Portrait with Scar,” yet as one might expect, Bozzio’s compositions take that style into regions that are heavily percussion-centric (two percussionists and a second drummer join the composer), while the rest of the orchestral arrangements tend to support, highlight and underscore the percussion section. Filled with dramatic shifts in mood and tempo, willful melodic mischief, and a near constant stream of directional changes, the five movements represent a magnum opus that would make his former bandleader proud. “Self Portrait…” is a bit more dark and angular by comparison, with percussion in a more supportive role. This is one of those discs that reveals itself slowly over repeated listens, but patience will certainly reward.