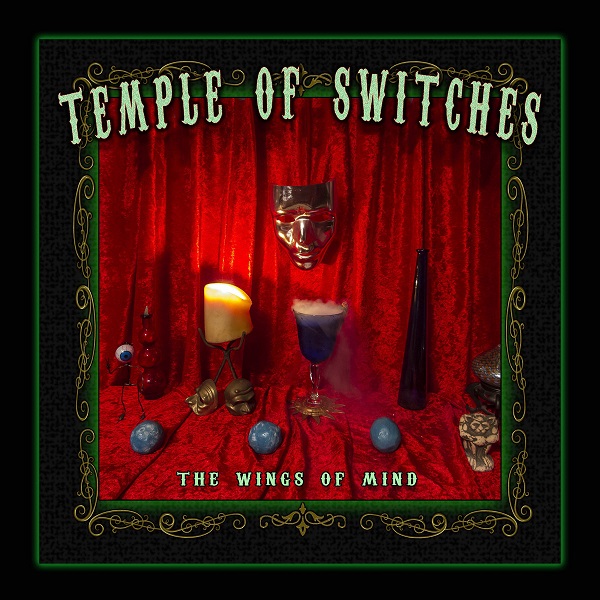 Tenk Van Dool is a California based multi-instrumentalist (guitars, bass, keyboards, vocals, and more), composer, and producer, and was the leader of the band Temple of Switches from their beginnings in 2012 until their disollution in 2015 following the release of their self-titled debut album. Since that time Van Dool has retained the band name as a studio project, and released two further albums, Helium Parade (2017) and the album reviewed here, The Wings of Mind (2020). The interesting thing is that there are many different musicians featured on the album, though bassist Dale Wiser and drummer David White seem to feature on most of the tracks, with keyboardist / singer Kevin McConnell contributing to several others (including lyrics) and several other singers participating as well, track depending. Overall, many of the nine cuts on The Wings of Mind embrace a certain degree of progressive metal, but there’s a lot of variety from track to track, and a few tracks completely defy that generalization, and with different singers (Jim Chavez, Van Dool, McConnell, and Clara Hembree) it can almost sound like several different groups at work on a single disc. But the common factor on every cut is Van Dool, and while he contributes as a writer on every track, other players get their share of writing credits as well. “Crusader” probably typifies what’s on tap here, singer Jim Chavez singing in a high register not at all unlike Geddy Lee, Van Dool sticking to guitar and keys, along with Wiser on bass, White on drums, all four sharing in the writing, and sporting a heavy, edgy sound. But two excellent tracks, “Pondering” and “One for All,” where Van Dool and McConnell join forces could almost be considered mainstream prog rock, while the completely instrumental “Freon Suitcase” crawls along at an interesting pace, featuring only Van Dool. “Back Seat,” with its vocals by Clara Hembree and all instrumentation by Van Dool, is an outstanding number, but also very out-of-character compared to the rest of the album. In short, for the open-minded listener, there’s plenty here to like, and a lot of ground is covered across these nine tracks.