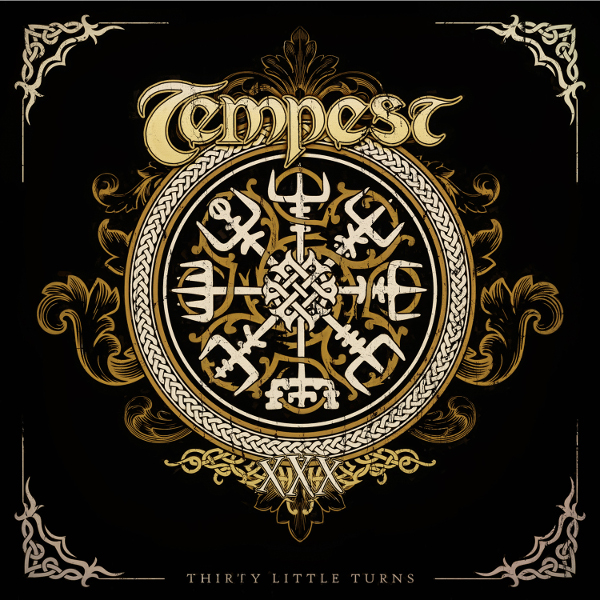 Given my love of Fairport Convention, Steeleye Span, and Boiled in Lead, it would seem like Tempest should be part of my musical life when it comes to folk-rock. But there’s so much music in the world, and only so much time, that while I was aware of the band’s existence, I never ended up hearing anything other than Turn of the Wheel (1996). Given the music presented on Thirty Little Turns, my ignorance is not an indicator of any lack of quality in Tempest’s music. The album title refers to the fact that 2018 is the 30th anniversary of the band’s existence, and such longevity speaks to the enduring nature of this kind of music. If you think of the bands I’ve already mentioned, and add Wolfstone and Horslips, you’re in the right area. Tempest presents a somewhat harder-rocking sound than Fairport or Steeleye, but lacks the punk overtones of some Boiled in Lead. Take rocked-up renditions of folk tunes from the British Isles, add some hot fiddle playing, and top it off with strong vocals including great male-female harmonies, and you’ve got the idea. There are additional features worth mentioning, such as excellent flute, melodic bass parts, and an imaginative cover of “Norwegian Wood,” all of which should convince anyone with an interest in folk-rock that this is a band worthy of attention. My problem with this is that it means I have a dozen or so albums from their past that I need to investigate! I curse my own hunger for good music… Anyway, it is apparent that the members of this band are very good at what they do, and are having a good time doing it. Original members Lief Sorbye (mandolin, vocals) and Adolfo Lazo (drums) are joined by Kathy Buys (fiddle), Ab Menon (guitar), and Josh Fossgreen (bass), of whom Menon is a newcomer while the others have appeared on at least one previous recording. Five of the ten tunes are at least partly traditional, including one (“Trolldans”) which I think is Swedish; the remaining tracks (barring the previously mentioned Lennon / McCartney cover and a set of reels credited to Patrick Caryannis and Paul Meehan) were penned by band members in varying combinations, with Sorbye the most active composer. The tunes range from delicate acoustic parts to hard-rocking energy, all done with the same care to detail. For fans of folk-rock, I can’t think why Thirty Little Turns wouldn’t scratch the itch — it’s a fine effort all round, and a rollicking good time.