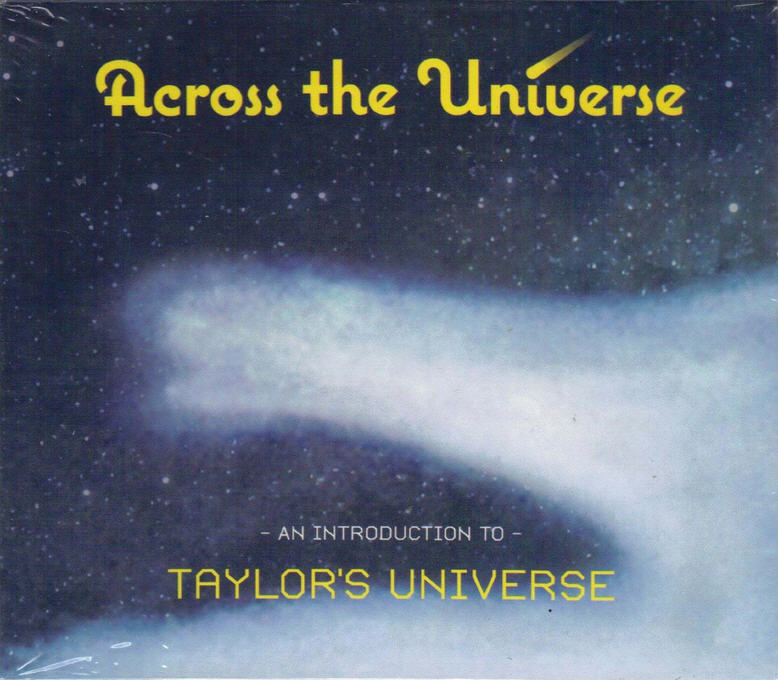 Robin Taylor has quite the body of work. Each new album builds on his previous work and adds new elements. And that brings us to the new Taylor’s Universe album, Across the Universe. Rather than compose and record another album of new music, Robin decided to release a selection of what he considers highlights from the Taylor’s Universe catalog, sampling from Kind of Red (2012), Artificial Joy (2009), and Return to Whatever (2009). Across the Universe is not what we have come to think of as a greatest hits release. Instead he recorded altered versions of seven tracks; rearranging, re-recording, remixing, or re-mastering the music. Even though Robin plays most of the instruments (guitar, keyboards, bass, percussion, etc.) the other musicians are basically the same as who played on Kind of Red, but different from the other two albums. Therefore, I am guessing the major alterations were made to the tracks from 2009. The timings between the original tracks and Across the Universe are all different, usually by a handful of seconds, but on “Fame” and “Haunted Yellow House” the differences are minutes. I am only familiar with Kind of Red, so I cannot comment on the musical differences from the other albums. I really cannot tell the difference on “Salon Bleu,” so this song may just be re-mastered. “Firestone” is definitely a remix as the saxophone heard at the beginning is now absent. And “Tortugas” sounds like the bass has been emphasized. So for the Robin Taylor purist you may not be interested in Across the Universe. But for someone unfamiliar with his work, Across the Universe is a great place to start. The music is outstanding.

Interesting concept here. Across The Universe is billed as “An introduction to Taylor’s Universe,” and I would agree that for a band with fourteen full length releases to date, a best-of compilation would be a good thing for listeners just tuning in now. But that’s not what this is, at least not the way it’s usually done. Instead, Robin Taylor and the current version of TU decided to, for whatever reason, re-record seven pieces that originally appeared on the albums Artificial Joy (2009), Return to Whatever (2009), and Kind of Red (2012). The latter album, from which “Salon Bleu,” “Tortugas,” and “Firestone” were culled, was originally recorded with a lean crew of only three instrumentalists, an excellent album for certain, but nonethelss it benefits from the six-piece lineup featured here and some changes in the original arrangements. “Days Run Like Horses,” originally featured on Artificial Joy seems more fluid, experimental and ‘live’ here in its current version. “Fame,” taken from the same album, trades some of its initial heaviness for a more reserved approach ramping up, arriving at that point later in the piece, and trimming several minutes off the near-ten minute original. Several of the same players are featured in this special lineup: drummer Klaus Thrane, saxophonist Jakob Mygind and (of course) Taylor were on the original version, but two new guitarists John Sund and Frank Carvalho (from Etcetera) feature here, as well as synth player Thomas Thor Viderø Ulstrup, who has been with the band on recent releases Evidence and From Scratch. The final two cuts are “Haunted Yellow House,” in a more animated and longer arrangement, and “Mooncake” – both from Return to Whatever. For one who’s never experienced Taylor’s Universe before, this is definitely a great introduction, but for those who have the three original releases, don’t miss out on these excellent alternate arrangements.

The Grand Trick - The Decadent Session – To tell you the truth, I have a difficult time getting into this music. I have made several attempts to listen to this CD, but I was never a real big fan of heavy rock music, even in the seventies....  (2006) » Read more

Hugh Hopper Band - Alive! – After his glory days with Soft Machine, Hugh Hopper went through some lean times (musically at least), until the mid to late 80s, when he hooked up with a crew of Dutch musicians for a number of tours...  (1999) » Read more

Kebnekajse - Electric Mountain – This recent reissue comes from Sweden circa 1977 and represents a collection of traditional folk melodies interpreted by the rather large ensemble Kebnekajse. As many as nine musicians collaborate on...  (1995) » Read more

Glenn Branca - The Ascension – This is a long overdue re-issue of Branca's first LP, before the days of the army of guitars, but well past his punk days. On this album, Branca was joined by three other guitarists, a bassist,...  (1996) » Read more

Cathedral - The Bridge – Thirty years ago, the US progressive band Cathedral released their first album, Stained Glass Stories. That was it until Tom Doncourt (keyboards) attended a King Crimson concert in 2003 and decided to...  (2010) » Read more