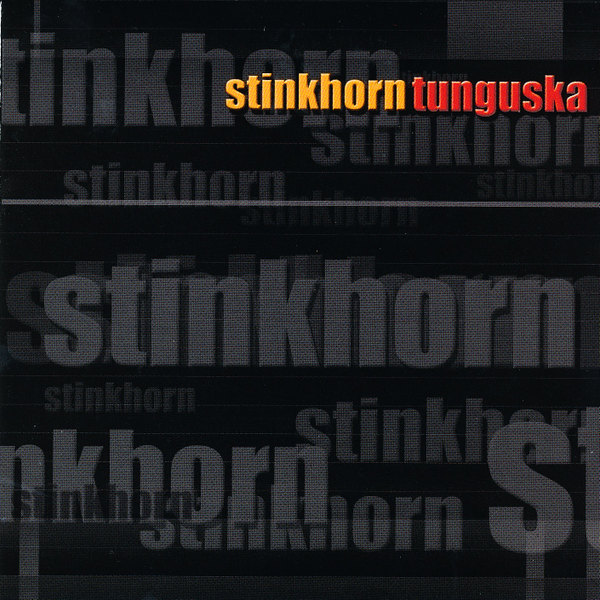 Back in #20 I reviewed the debut by this Seattle jazz group. I’m happy to say that this second release, Tunguska, is every bit as good as the first, and maybe better. Stinkhorn’s personnel and basic sound remain unchanged: loose jazzy grooves with wild guitar and sax offset by freer, more chaotic sections. One thing they do is lay down a driving, slightly off-kilter groove with Howard Ouchi’s drums and John Morris’s bass, then top it with a straggly unison line between Michael Monhart’s sax and Brain Heaney’s distorted guitar. When they’re done with the head, it’s off into solo territory, and when these guys solo, they don’t go for tons of notes spewed out in dexterous, hyper-rehearsed scales. They work their ways to the outskirts of the instruments for maximum intensity, not afraid of dissonance at all. Always unpredictable and never content to stick to convention, Stinkhorn embody what I like most in jazz. In spite of the often-mangled guitar sounds, the music doesn’t really resemble rock in the least. Ouchi’s drumming in particular is much looser and freer than most of what you hear these days, allowing the rhythm to be a matter of group consensus rather than everyone sticking with his law. Tracks tend to be short and flow together, reminding me of Soft Machine back around 7. Soft Machine is probably a good comparison: take that band and swap guitar for the keyboards, add some chaos, and you’re in Stinkhorn’s ballpark, but not in a derivative way.

Peter Blegvad - Downtime Etc. – After Peter Blegvad’s first two solo albums (The Naked Shakespeare in 1983 and Knights Like This from 1985) failed to make much money for his record label, the former Slapp Happy songwriter...  (2002) » Read more

Various Artists - Un Voyage en Progressif Vol. 1 - 3 – Musea is currently on a campaign to make the many artists on their label better known to the prog-buying world via these three budget-priced compilation CDs, each featuring about a dozen different...  (2000) » Read more

Kraan - Diamonds – Kraan, now down to a trio of Hellmut Hattler, Jan Fride, and Peter Wolbrandt (bass, drums, and guitars/vocals respectively), seems to have found new freedom and energy in the three-piece format, as...  (2011) » Read more

What is Corrado Rustici up to?