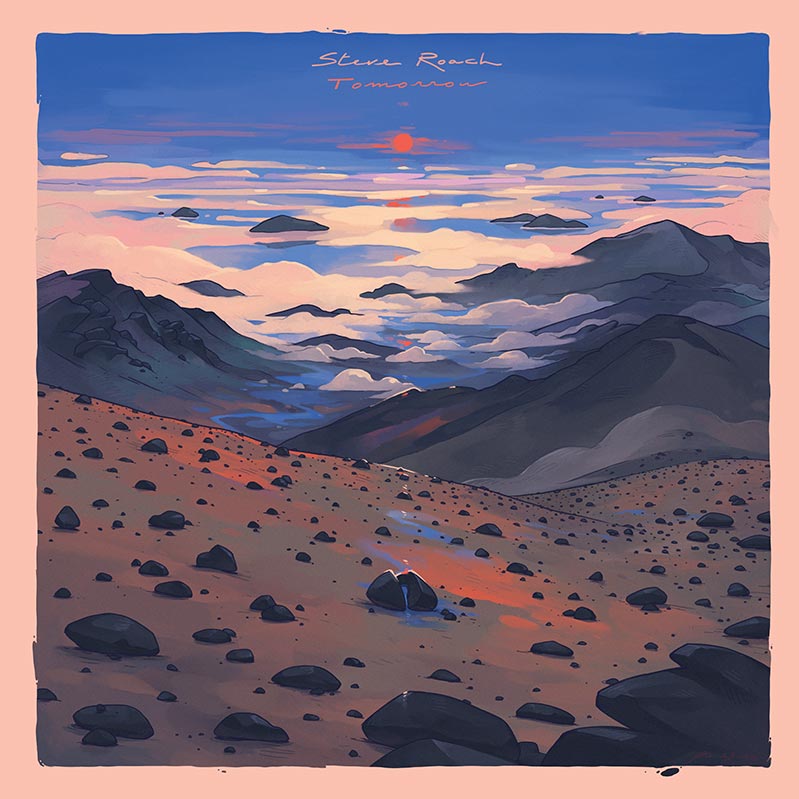 This is a very different kind of release for Steve Roach, although he has travelled these waters before. Instead of exploring the dreamy sounds that follow his floating ambient style, with the five tracks on Tomorrow he has reopened his Berlin School box, traveling back to where his muse began in the early 80s, and also where he’s stopped numerous times on his journey forward in the years since, each time creating something more engaging and powerful. The opening title track is dominated by elemental sequences, though throughout it there are floating drifts supporting it to varying degrees along its fifteen minute journey (twenty minutes if you get the LP or download), as the sequences slowly become more muscular and dense, as the floating textures ease in and out of the panoramic fabric. By the conclusion of the piece the repetitive elements have all but subsided and the listener is caressed by flowing waves of sound. The second piece, “Optimal Being,” takes a similar trajectory: briskly dancing colorful sequences that grow and subside and grow again, while subsonic elements are slowly introduced, adding depth and distortions, eventually rising to the surface in the last few minutes of the piece as majestic floating textures are again introduced, growing as the program gently morphs into the next piece, “HeartBreath,” which features some subtle percussive elements as it leaves the busy sequences far behind and carries forward with beautiful floating waves of bliss that slowly breathe in and out as the piece reaches its conclusion. The final two pieces, “Spiral of Strength” and “A Different Today,” together comprise the fourth side of the LP, the former reintroducing the colorful pointillistic sequenced patterns amid gentle flowing washes of textural energy, while the latter’s sequences drive deeper and add additional complexity to the sonic palette until around the eight minute mark where dreamy floating atmospheres take over, gently flowing to its twelve minute conclusion. Overall, Tomorrow offers the listener equal parts of floating ambient and sequenced minimalism.