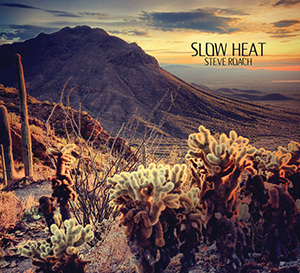 I’m happy to say that I have most of the Steve Roach back catalog, and have listened to all of those many times over the years, sometimes even leaving them play in an endless loops for days for the sake of total immersion (yeah, my family doesn’t understand my fascination with this long-form electronic music), but I was missing a few titles here and there, Slow Heat being one of them. Now, with this 20th Anniversary remaster in hand, I am missing one less. Rising out of the darkness like the pre-dawn light in the morning sky through the dense trees of the forest, this single flowing 71 minute track wraps the listener with a blanket of warmth, slowly growing out of nothingness and making its presence felt as ot evolves through a kaleidoscope of changes. The late 90s was a time when Roach was working a number of collaborations with the likes of VidnaObmana, Roger King, and others, and at the same time working on the concept of infinite playback soundworld environments, of which this is a classic example from that period. Sound seems to converge on the listener from every direction, flowing synth washes inhaling and exhaling while a number of texural fabrics and seemingly subsonic waves merge with it all, plus the coming and going of interesting natural sounds, most likely field recordings (one can hear the beautiful sound of crickets and other insects in the desert night in various parts) that interact with the ongoing flow as the piece proceeds. Since I haven’t heard the 1998 original, I am at a loss to say exactly what the new remastering has brought forth, but the fine tuning was done by none other than Spotted Peccary’s Howard Givens, so you know it’s going to sound exceptional. No matter how close you listen to this, whether as background while you work or relax, or in a darkened room with headphones, Slow Heat will leave the listener a changed and more highly evolved person at the end, as it fades back into the darkness.