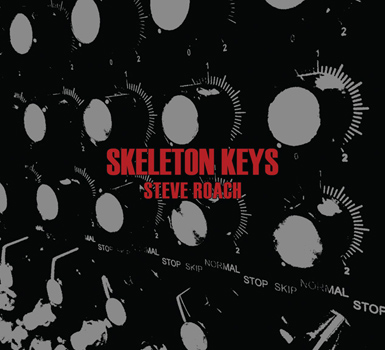 I know you’re probably saying to yourself – another ambient Steve Roach album? No. Roach hasn’t recorded an album anything like Skeleton Keys in several decades, based almost entirely on analog modular synthesizer and sequencers, with a solid nod to German pioneers like Klaus Schulze, early Tangerine Dream and other like-minded travelers on both sides of the big pond. This is in fact is where Roach started his work back in the early 80s – on our photo of him on the Exposé artist page from 1982 (around the time of his second album Traveler) one can see the big modular synths and associated gear in his private studio with all the knobs, jacks, and cables. This was in fact the genesis of electronic music. Well, after many years Roach decided to break this gear out again in 2014-15 and create something new with it, occasionally blending in subtle elements of his more contemporary sounds. Revisiting ancient concepts via his new hardware implementations of this early electronic instrumentation after so many years, he has capably infused new feeling and emotion into the compositions that might come off as merely mechanical in less capable hands, but Roach has always been a master at this, and has moved his technology and creativity forward together to a whole new level. There are eight titles here, although “It’s All Connected,” “Outer Weave,” and “Symmetry and Balance” fuse together to form one 24 minute block of pulsating electronic bliss. The remaining five tracks also wield a cornucopia of pulsating rhythms, darting melodies, and woven textures that always sound fresh and ever-changing. Skeleton Keys will also be available as a single LP with 3 tracks from the CD and 1 exclusive track.